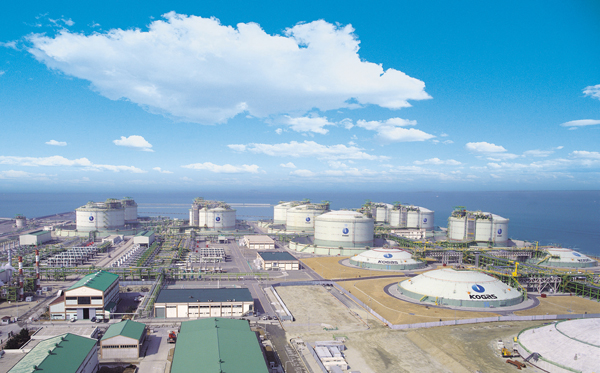 In December 2009, the board of directors of the Korea Gas Corporation (Kogas) decided to go ahead with the acquisition of gas mines in the Horn River and West Cutbank in northeastern British Columbia, Canada. A consulting firm advised against the acquisition on the grounds that it would be financially risky to purchase both mines at once.

The board of directors of the state-run company, however, pushed on for a couple of reasons. EnCana Corporation, Canada’s largest gas producer, refused to sell either of the sites separately. Initially Kogas was only interested in the mine in the Horn River as the profitability of the West Cutbank site was low.

And the administration of Lee Myung-bak was leading a drive for energy independence for Korea.

Kogas bought a 50 percent stake in both mines with an investment plan of $2.8 billion Canadian dollars ($2.6 billion).

So far, $677 million has been invested in the Horn River site and $252 million in West Cutbank. 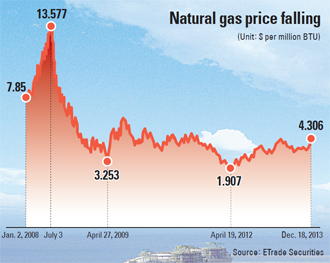 Those weren’t the only major investments in energy made by the company.

The project pumped methane from the coal bed in inland Queensland to Curtis Island, eastern Australia, so it could be liquefied and shipped out to markets across the globe. Kogas completed a contract to bring 3.5 million tons of liquefied natural gas to Korea each year for 20 years starting in 2015, and it bought 15 percent of the project’s shares. Fellow shareholders included Australia’s Santos, Malaysia’s Petronas and France’s Total Corporation.

Kogas’s initial investment was $610 million for 15 percent of the project, and it invested an additional $1.2 billion in the project.

All three investments were promoted by the Lee administration as examples of Korea’s pursuit of energy independence. Korea imports 97 percent of its energy needs.

But the investments quickly backfired. As the United States started ramping up shale gas development, the value of gas mines plunged.

In 2008, when Kogas made aggressive foreign investments, natural gas sold for as high as $14 per million British thermal units - a unit that estimates the amount of gas required to produce 250,000 calories. The price plunged to $2 last year and hovered around $4 this year.

The collapse of gas prices went right to Kogas’s bottom line. Kogas announced last Monday that it adjusted this year’s projected 299.3 billion won ($281.9 million) net profit to a 342.2 billion won loss, partly due to losses from the Horn River gas mine.

Analysts say the losses will continue from the Gladstone LNG project. According to a Kogas study submitted to Democratic Party lawmaker Oh Young-sik, the project is currently valued about $760 million lower than the investment made so far.

“This was an unfeasible investment,” Oh said. “Kogas failed to read the flow of the world energy market.”

Saenuri Party lawmaker Lee Jin-bok predicted the company will lose another 4.2 trillion won out of a 9.8 trillion won investment in overseas resources development projects pushed by the Lee administration.

Kogas has debt of about 32.3 trillion won, compared to 8.7 trillion won in 2007. The figure makes Kogas the public corporation with the third-largest debt after the Korea Land and Housing Corporation and the Korea Electric Power Corporation. Kogas has a debt-to-equity ratio of 385 percent.

Kogas announced in September its plans to reduce its debt ratio to 246 percent by 2016. The government wants the company to speed up its debt reduction.

“Our investment in the gas mines was prompted by the government policy of securing independent energy supplies, but the strategy failed,” said an official from Kogas. “The world energy market changed very fast, and even major foreign oil companies could not predict the market trend.”

Some analysts contend that the failure can be partly explained by the company’s monopoly in the local?gas development market and the blinkers that accompany such dominance.

“In the future, the world energy market will change even faster,” said Cho Sung-bong, an economics professor at Soongsil University.

“The Korean gas market should bring in more players for competition in a bid to reduce any potential risks.”