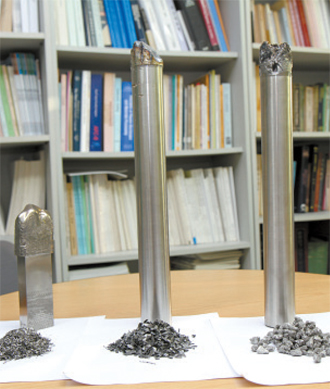 Heaps of raw materials, or titanium scrap, can now be recycled into titanium ingots with domestic technology.

The idea of domestically producing titanium, material for Tony Stark’s armor in the Hollywood film Iron Man, is far-fetched no more, according to the Korea Institute of Industrial Technology. The government-supported research institute recently became the first in the world to develop technology for recycling titanium metal, which was transferred to domestic machine processing company Hansco on Dec. 3.

Titanium is strongly favored in many industries as the metal is mechanically strong and corrosion-resistant while also being lighter than steel. The scarce material is in demand in many industries, including aviation, defense and medical.

Before the recent breakthrough, Korea had to import raw titanium materials and rely on foreign technologies to manufacture and process titanium metal as domestic technologies had been limited to refining. As a result, the metal was produced in minimal quantities, with prices set too high.

To address this problem, a team at Kitech led by Dr. Moon Byung-moon launched a research project in 2011. After two years of research, the team has successfully developed the technology to recycle titanium metal by using electromagnetic induction devices and hydrogen plasmas.

The idea is to reclaim titanium scrap, which is generated in the process of manufacturing titanium ingots. Titanium scrap was previously considered a waste due to its high-level impurities and was exported at a low price.

The new technology, however, would allow recycling all the country’s titanium scrap, preventing 1,500 to 2,000 tons of titanium from flowing overseas every year. There will be a considerable import substitution effect, and industry insiders predict that nearly 40 percent of the 4,000 tons of ingot imports every year will be substituted with the recycled material. Manufacturing costs will be reduced by more than 20 percent.

On Dec. 3, Kitech signed an MOU with Hansco to hand over its titanium recycling technology. Hansco announced its plan to invest in facilities for refining and casting high-purity titanium ingots, along with its goal of beginning mass production by 2016. Once the facilities are up and running, Kitech said, it will begin producing titanium with a yearly revenue of 50 billion won. Exporting titanium ingots will also be possible, a turnaround from total dependence on imports.

“Despite the rising demand, domestic production of titanium had been weak,” said Dr. Moon, describing the long-term effects of his team’s achievement. “This is a big step, as the recent development was achieved entirely with domestic technologies. Hansco will grow global competitiveness with the technology we transferred, and Korea, which has small scarce metal reserves, will be able to secure resources for future.”