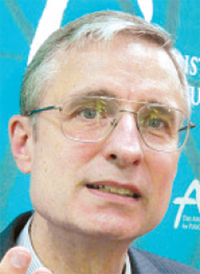 Bennett, a senior analyst at RAND Corporation, a U.S. nonprofit global policy think tank, conducted an email interview with the Korea JoongAng Daily and JoongAng Ilbo on Wednesday, saying Kim “apparently is carrying out an extensive purge that will disrupt the government of North Korea, its economics and its stability.”

Jang, considered to be Kim’s guardian and the second-highest ranking North Korean official, was the husband of the late Kim Jong-il’s sister Kim Kyong-hui. He was executed Dec. 12, indicating a shift of power within the North Korean regime two years into Kim Jong-un’s rule. Jang’s aides were executed earlier.

“The drama that has accompanied this action and the execution of a family member suggests that Kim Jong-un really was concerned about potentially being overthrown - he let Jang Song-thaek become too strong,” said Bennett.

Bennett, who specializes in strategy, counter-proliferation and Northeast Asia military issues, including the deterrence of the North Korean nuclear threat, surmises that Kim either perceived Jang “as a threat” or the two “were seriously arguing over some elements of policy.”

However, Bennett said purging Jang was not completely unexpected, pointing out that Kim “eventually would have removed his uncle from power, just as Kim Jong-il did with his uncle Kim Yong-ju,” the younger brother of Kim Il Sung who initially was believed to be his likely successor. But Kim Yong-ju “was not killed or treated in such a brutal manner.”

“The Kim family has always been very good at balancing the second tier of leaders, so no one becomes strong enough to carry out a successful uprising,” said Bennett. He pointed out Jang had been removed from power twice before.

Dec. 17 also marked two years since the passing of Kim Jong-il. While some analysts point to Kim Jong-un’s regime as having stabilized during the two years since he came to power, Bennett said, “Kim Jong-un is not as strong as many believe.”

While Kim carried out the purge, he said, “in doing so he has threatened the upper tiers of regime leaders in ways that had largely not occurred in decades.” This will add to those elites who have “personal reasons” to act against Kim, biding their time, “fearing for their own security and that of their families.”

“They may act very loyal day to day, but look for opportunities to remove Kim Jong-un and the threat he poses to them personally.”

In the meantime, Bennett said, “the regime will be more unstable for months to years, depending upon how extensive the purge becomes.”

While the execution “suggests that Kim Jong-un thought Jang was just too powerful and had to be removed,” he said, “it also means that anyone else powerful enough to stage a coup will likely also be executed.

“Kim Jong-il used provocations to demonstrate that he was still empowered even when he looked weak after his 2008 stroke; this was especially true in 2010. Kim Jong-un may use provocations to divert the attention of his elites from the ongoing purges and the resulting economic difficulties North Korea seems likely to experience.

“But if he truly fears overthrow, he could even order an invasion of [the Republic of Korea].”

In such a scenario of sudden change in Pyongyang, Bennett also said, “Washington and Seoul have some of the capabilities needed to control the WMD (weapons of mass destruction) - but not enough.”

As an example, he said, many U.S. forces that could help counter North Korean weapons of mass destruction must be deployed from the United States, which can take weeks and even months.

South Korean defense officials have pointed to concerns that Pyongyang might carry out more provocations early next year as Seoul and Washington hold two months of joint military exercises starting in February.

But Bennett said South Korea is not well prepared in the event of a sudden change of situation in the North. In such a case, he said, North Koreans have to believe that unification would be good for them, and South Korea doesn’t presently have laws in place that will ensure this.

“As a result, it is quite possible that North Korean military and security service personnel would fight against unification - and that fight could be very costly,” he said.

He said all North Korean agents in China have been ordered to return home and many can expect to be purged if they return. Thus, this incident is not just an issue of the “purge of Jang Song-thaek, but the potential destruction of the economic system that supported Chinese-North Korean trade,” said Bennett. “If that happens, Kim Jong-un and his people will pay a dear price, as China may then feel unable or unwilling to continue major trade with North Korea.”

He added that Jang, who had a close relationship with the Chinese, and his people “were able to control some of the North Korean corruption, thereby allowing trade to occur,” but without this sort of control Chinese companies may have trouble earning a profit and turn to investing in other countries.

Bennett previously worked with the office of the U.S. secretary of defense, U.S. Forces Korea and Japan, the U.S. Pacific Command and Central Command, and the Korean National Assembly.

He said Pyongyang at the moment seems “unlikely to accept the kind of economic opening that would be required for outside companies to invest in North Korea” and that its foreign policy “will become tougher, including the potential for provocations,” as long as Kim Jong-un feels threatened.