Diabetes patients, costs of treatment on the rise

Diabetes patients, costs of treatment on the rise 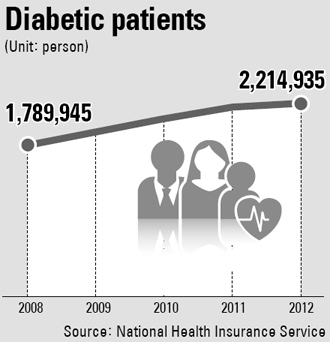 Kim Jeong-bok, a daily wage worker in his 50s, was diagnosed with diabetes when he was 35. Doctors told him to take daily insulin shots and pay attention to his diet; however, he struggled to afford the treatment.

As Kim’s physical strength deteriorated, he became unable to work at the construction sites and had to skip his insulin injections more often.

Ten years after his first diagnosis, he developed chronic kidney disease as a result of diabetes-related complications. Now Kim must undergo dialysis three times a week; otherwise, he wouldn’t be able to survive.

“I should have managed my diabetes consistently from the beginning,” he said. “Now my body has been destroyed from all the complications.”

Kim is just one in a skyrocketing population of diabetics in Korea over the recent years. And the disease is slowly becoming the second-most costly medical condition in the country, trailing just behind hypertension, the latest statistics show.

According to the National Health Insurance Corporation, the number of diabetic patients increased from nearly 1.79 million in 2008 to more than 2.21 million last year. The annual increase rate was 5.5 percent, it said.

Because it is nearly impossible to completely cure diabetes, managing the condition is imperative. Patients must monitor their blood sugar levels for their entire lives. Although insulin shots and other medicines can control blood sugar levels, the effects are temporary.

According to doctors, the complications from diabetes are more vicious than the condition itself. The insurance corporation said that about 50 percent of diabetics suffer from complications.

Chronic kidney conditions, infections and retinopathy are some of the more common complications. Diabetic patients also have more than triple the risk for stroke and cardiovascular ailments.

“Many diabetic patients are destined to suffer from complications,” Dr. Song said. “The most important thing is to delay that as much as possible through thorough management of the disease.”

Experts said that maintaining a normal weight and avoiding abdominal obesity in particular are necessary to prevent diabetes. They also advised those older than 30 to have yearly blood glucose tests if they have diabetic family members. A normal glucose level is 110 milligrams per deciliter or below; anyone with a higher figure should consult with a doctor.