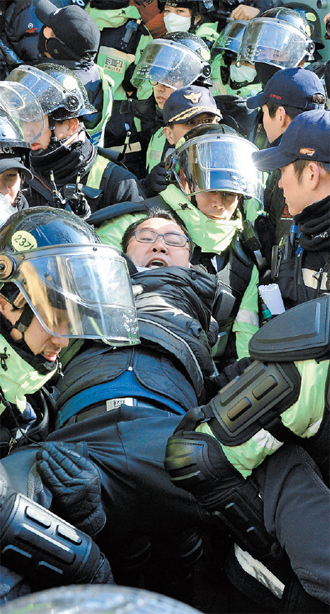 Police drag a member out from the headquarters of the Korean Confederation of Trade Unions yesterday in Jung District, central Seoul. Authorities tried to arrest key members of the railroad workers’ union yesterday, mobilizing 5,000 police officers to forcibly enter the KCTU offices. [NEWSIS]

The police made a major push to arrest key members of the railroad workers’ union yesterday, surrounding the headquarters of the Korean Confederation of Trade Unions with more than 5,000 police officers and spraying tear gas to force their way into the office.

The unprecedented move by the police came six days after a court granted arrest warrants for 25 leaders of the labor union of the Korea Railroad Corporation, or Korail, which has been staging the longest strike ever in its 65-year history.

The authorities believed about six to nine railroad union members, including the labor union leader Kim Myung-hwan, were in the KCTU office in Jung District, central Seoul.

The police broke windows and tore down the front gate to get inside at around 11 a.m. yesterday, physically confronting union members in the process. Nearly 120 members of the railroad union, confederation and the Unified Progressive Party who tried to block the passage were taken in by the police for obstruction.

Representative Kim Mi-hyui and Kim Jae-yeon, who also stood in the way, were among the UPP lawmakers taken away by the police.

As of 6:30 p.m. yesterday, the police finished their sweep through the 18-floor building, owned by the liberal daily Kyunghyang Shinmun, but came up empty. Korean broadcast news agency YTN later reported that all the targeted railroad union leaders had left the building early in the morning, although that could not be confirmed at press time.

The raid marked the first time authorities had forced their way into the labor union’s office since its foundation in 1995, raising the spectre of escalating tensions with the Park Geun-hye administration.

The railroad union began the 7,600-member walkout on Dec. 9, protesting against the government’s attempt to set up a subsidiary company to run a new high-speed train line from Suseo-dong, southeast of Seoul, to Busan. The union calls the move a stealthy way of privatizing national rail services.

The walkout by train workers has reached 15 days as of today, the longest rail strike in Korean history. The Park Geun-hye government has repeatedly said it has no plans to privatize the new KTX line, which is expected to generate lucrative profits once in operation in 2016.

Korail said it will have a 41 percent stake in the company, while the rest will be owned by public funds. The government also claims the introduction of a subsidiary company to run the new line will bring about positive competition for the railroad industry, a claim the labor union rejects, arguing it is against the public nature of railroad service.

According to Korail, the debt of the railroad company is estimated to be 17 trillion won ($16 billion), mostly due to lower overall business on its Mugunghwa line, Saemaeul line and cargo transportation. Only the KTX bullet train lines are profitable for Korail.

The government has labeled the prolonged protests a “selfish” action by a labor union only interested in sustaining its monopoly.

Land, Infrastructure and Transport Minister Suh Seoung-hwan stressed at a press briefing yesterday that setting up a subsidiary would lead to “positive competition within the public sector” and “improved efficiency.”

“Introducing competition to the railroad industry [by having a subsidiary] is not privatizing it,” Suh said.

To ratchet up the pressure on the labor union, the railroad operator filed a lawsuit Thursday demanding 7.8 billion won in compensation for damages it has incurred from the walkout.

The case is an addition to an ongoing lawsuit by Korail calling for 9.7 billion won in compensation from the union for its 2009 strike.

While the authorities were going all out to arrest key members of the labor group, Minister Suh announced the government will nullify the operation license for the Suseo-Busan KTX line if the subsidiary company is sold to private entities.

“People have given a clear message that they are against the privatization of the railroad and medical industries,” said Kim, who later visited the KCTU building around 4:30 p.m., urging the government to stop persecuting the labor union.

The ruling Saenuri Party, however, is siding with the government, criticizing the KCTU and the Korail labor union for physically resisting the execution of a court order.

“The strike by the railroad workers’ union is an illegal strike that takes the public hostage,” said Yoon Sang-hyun, a senior Saenuri lawmaker. “Employing the police against an illegal strike using the law is what the government ought to do to protect the rights of its citizens.”

The DP has advocated for new legislation specifically designed to ban the privatization of the bullet train service. But the Saenuri Party has rebuffed that proposal, saying it would be an overreach of the legislative branch and possibly a violation of international free trade agreements.