Rare ibises from China a symbol of friendship

Rare ibises from China a symbol of friendship 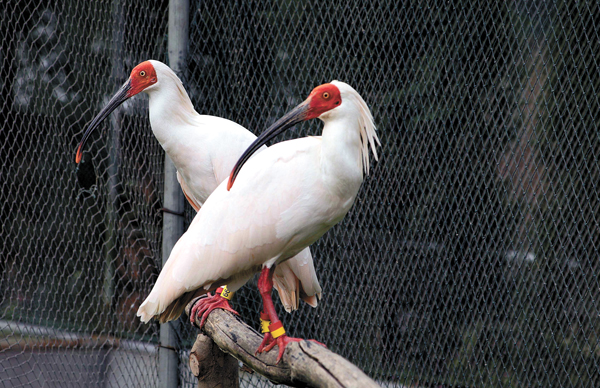 A pair of crested ibises from China in October 2008. Provided by the South Gyeongsang Provincial Government

As a symbol of friendship between Beijing and Seoul, two male crested ibises from China are set to arrive here today in style at Incheon International Airport.

The crested ibis, once widespread in Korea, China, Japan and Russia, is highly endangered.

Flying business class, the ibises will arrive in special cases designed to block out loud sounds and light in transit; they will be accompanied by an entourage of 10 people, including two Chinese bird keepers and Korean officials - quite a royal welcome for the birds.

Ibises used to be common enough here that they were mentioned in children’s songs. However, their last natural sighting was in 1979, when they were observed near the truce village of Panmunjom in the demilitarized zone.

The birds are currently on the International Union for Conservation of Nature’s red list of endangered species and are listed as Korean Natural Monument No. 198 under the Cultural Heritage Administration.

Two ibises, one male and female, were adopted from China in 2008 by the Ibis Restoration Center in Changnyeong, South Gyeongsang, to restore the species in Korea.

These ibises came from Shaanxi Province in northwest China, considered the hometown of the Chinese crested ibis.

They have hatched 24 birds since then - bringing the total to 16 females and 10 males. But environmentalists want to diversify their genes and hope the new ibises can help push the number of current birds in Korea to 100 by 2017.

After the two new male ibises arrive from China, they will be transferred to Changnyeong and quarantined. The two Chinese bird keepers will help the birds adjust to their new environment for about a month; then they will join the other ibises at the Ibis Restoration Center there.

“We think mating between the ibises will be possible by mid-January,” said Kim Han-jun, a Gangwon Provincial Government environmental official.

When President Park visited Chinese President Xi, they agreed upon the donation of the two ibises in their joint statement, as well as “cooperation between the two countries to help prevent their extinction.”