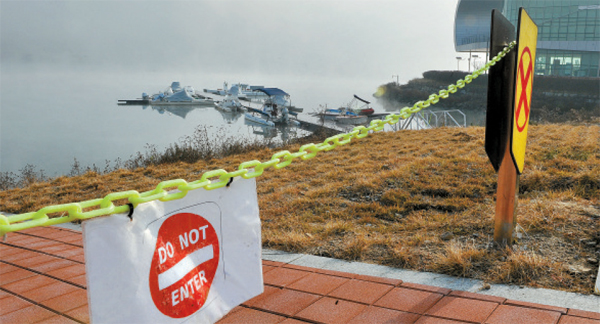 The entrance to the arena for the World Rowing Championship on Tangeum Lake in Chungju, North Chungcheong, was closed on Dec. 22. The arena has been left unattended since the championship was held in August. By Kim Seong-tae

Regional governments have suffered nearly a billion dollars in losses in recent years by hosting unprofitable international sporting events, with some critics claiming that certain city mayors and provincial governors used them for political gains.

Since 2010 until recently, five regional governments across Korea have hosted five international sporting events and recorded more than 1 trillion won ($951 million) in total losses, an analysis by the JoongAng Ilbo revealed.

Over the past four years, South Jeolla has hosted the annual Formula One Korean Grand Prix in Yeongam. The city government of Sangju, in North Gyeongsang, hosted the World University Equestrian Championship in 2010, while the Daegu Metropolitan Government in 2011 hosted the World Championships in Athletics, which was organized by the International Association of Athletics Federations.

All of the five sporting events failed to bring in revenue. And the five governments spent about 1.2 trillion won to build infrastructure and operate the events, while the earnings from ticket sales hovered at just 203 billion won. In the end, the losses amounted to nearly 1 trillion won.

South Jeolla recorded the highest loss for hosting the Formula One race for four consecutive years. The accumulated losses amounted to about 676 billion won. The provincial government invested about 493 billion won to build the track and spent tens of billions of won each year just to host the event. Infrastructure aside, the province spent about 794 billion won to operate the event for four years and only saw about 118 billion won in revenue.

Daegu recorded the second-highest loss. It recorded a 243 billion won of loss for hosting the World Championships in Athletics. While it spent about 308 billion won to build the stadium and operate the event, the total revenue, including ticket sales, was just less than 66 billion won.

Both those governments received subsidies from the central government and tightened their purse strings for other projects to make up for the losses. They also took out loans to conceal the damages. South Jeolla took out 297 billion won in loans and has so far paid off 161 billion won. The outstanding balance is about 20 percent of the province’s total debt.

Meanwhile, Incheon, which took a 24.7 billion won hit by hosting the Asian Indoor and Martial Arts Games this year, is now recording the highest debt ratio among local autonomous governments nationwide. Its fiscal situation has deteriorated even further since it invested in hosting the Asian Games next year.

The city government of Chungju, North Chungcheong, constructed a 7-meter-wide, 1.4-kilometer (7.7-yard, 0.87-mile) road along the city’s Tangeum Lake for the World Rowing Championships for TV broadcasters to air the event live. The event ran from Aug. 25 to Sept. 1.

Chungju spent 9.3 billion won to build the road, but it was only used twice during the competition for a total of three hours and 50 minutes.

After the event, the road was opened to the public as a promenade, but only dozens use it every day. “It is a concrete road, so you can’t feel the beauty of the lake,” said Kim Ju-hyeong, a 44-year-old resident of Chungju, during his stroll. “I’m not sure if anyone is willing to use it.”

Chungju won the bid to host the event when Kim Ho-bok was the mayor; and the road was built at the behest of current Mayor Lee Jong-bae.

Lastly, Sangju, in North Gyeongsang, spent 21.5 billion won to real headache for the city. The indoor and outdoor facilities are currently being used as a horse riding club for the tourists and local residents, but it rarely gets any visitors.

When the JoongAng Ilbo visited on Nov. 21, only four university students were there. Because membership is so low, Sangju has recorded 150 million won of annual losses just from maintenance, in addition to the 24.6 billion won it lost for hosting the event three years ago.

Despite suffering massive losses from hosting these international sporting events, local government officials insist that the promotion of their cities has had a positive overall effect. That argument, however, is hardly convincing.

When Daegu hosted the World Championships in Athletics in 2011, it received 346,958 foreign tourists. But that number fell to 343,505 the following year, while the number of foreign tourists to Korea went up by 14 percent. “There is a limit for how much you can promote a city to the world with a one-time sports event to attract tourists,” said Kim Hyung-sup, a professor of tourism management at Taegu Science University.

Officials in the Daegu government, however, argued that they could feel the difference. “When we visit other countries, particularly Europe, we can sense that the image of the city is improved,” said Kim Jong-chan, a senior Daegu Metropolitan Government official in charge of investment and promotion.

A few of the cities even failed to promote their events overseas because they weren’t advertised or broadcast internationally. The World Rowing Championships in Chungju and the World University Equestrian Championship in Sangju were never aired outside Korea.

Critics have also complained that unprofitable sporting events only serve to glorify the achievements of local politicians. Because it takes time for financial losses incurred from the events to be calculated and made public, politicians often use their hosting of an international event as fodder for re-election campaigns, they say. In fact, most of the events are initiated by city governors or mayors themselves.

“After calculating profits and losses for hosting a major sporting event, officials and politicians who pushed forward with it must be held accountable in the instance of a fiscal crisis,” said Chung Hee-jun, a sports sociology professor at Dong-A University.

Daegu’s path toward hosting the World Championships in Athletics started in 2003, when Jacques Rogge, the president of the International Olympic Committee at the time, visited the city. Rogge thought Daegu could benefit from hosting the competition, and proposed his idea to Cho Hae-nyoung, who was then the mayor. The plan was welcomed by the city council, and a committee was formed in June 2005 to implement it. In the end, Daegu won the bid but ended up with 243 billion won in losses as a result.

In South Jeolla, Gov. Park Joon-yung conducted a feasibility survey before hosting the Formula One Korean Grand Prix. In the report, the Korea Institute of Sport Science under the state-run Korea Sports Promotion Foundation projected that hosting the yearly event from 2010-16 would bring in about 111 billion won in profit for the province.

On the contrary, South Jeolla ended up with 676 billion won worth of losses after four years. In explaining its inaccurate prediction, the institute claimed that the province increased its infrastructure investments, from an initial 200 billion won to 490 billion won. “The province also spent tens of billion won in television broadcast rights every year, although it was never accounted for,” it said.

As the losses snowballed, South Jeolla negotiated with the Formula One Management, the operator of the event, to lower the fee for the rights to host the competition. Officials succeeded in bringing it down from $43.7 million won last year to $27 million won this year. The province made another attempt to decrease the amount further to $20 million won for 2014, but an agreement was never decided upon, resulting in the cancelation of next year’s events in Yeongam.

Because the contract guarantees its priority until 2016, the province said it will seek additional negotiations next year, but right now that prospect remains unclear.

If South Jeolla fails to host Formula One in 2016, the 490 billion won circuit will be useless. The province could rent out the facility for domestic professional races and amateur events, but profit from renting out the circuit for this year only totaled 2.9 billion won - just 0.6 percent of the total construction costs.

Right now regional governments are facing increasing financial troubles from the costs of these international sporting events, and their losses are only expected to grow in the coming years. Incheon will host the Asian Games next year, while Gwangju, in South Jeolla, will host the Summer Universiade in 2015. In 2019, the city also plans to host the World Aquatics Championships.

The Incheon Metropolitan Government is already struggling. At the end of 2008, the city had a total debt of 1.5 trillion won and that figure went up to 2.9 trillion won at the end of June this year. About 1.2 trillion won of the current debt resulted from investments toward the Asian Games, including stadium construction.

After Incheon won the bid in 2007 to host next year’s games, the central government recommended the city use Munhak Stadium, which was specifically built for the 2002 World Cup Games, as its main venue; however, the mayor at the time, Ahn Sang-soo, insisted that a new facility could be built using civilian investments.

The plan ultimately failed to materialize, and the city ended up paying 490 billion won for the construction of the main stadium and 10 other facilities for the swimming and volleyball competitions.

When including the costs of operating those stadiums, Incheon will have to spend a total of 2.35 trillion won for Asian Games. Of that sum, it needs at least 575 billion won for next year. However, the city’s debt is expected to increase next year. Incheon estimated that it will face 3.3 trillion won worth of debt at the end of 2014, which translates to a 39 percent debt ratio - just 1 percent shy of 40 percent, the limit for a regional government to be considered in a state of fiscal crisis. If such a thing were to happen, the city would need to obtain permission from the central government to spend and allocate funds.

To avoid this, the Incheon Metropolitan Government is lobbying the central government for more subsidies. Incheon lawmakers recently submitted a bill to the National Assembly requesting an increase in state support for the Asian Games, but it was shelved because it was considered preferential treatment for the city.

“We cannot give up the Asian Games just because debts are accumulating,” said Shin Gyu-cheol, a spokesman for the alliance of civic groups countering Incheon’s fiscal crisis. “Those who hailed the hosting of the event must be held accountable.”