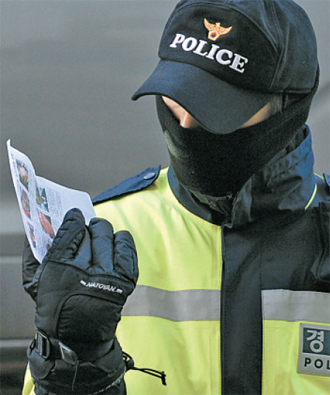 A policeman looks at a leaflet on which photos of Korail union leaders are printed yesterday in Jeong-dong, Jung District, Seoul. [NEWS1]

Despite their controversial raid of the Korean Confederation of Trade Unions (KCTU) without a search warrant on Sunday, the police failed to arrest key members of the railroad workers’ union.

The police were looking to arrest 25 union members after a court issued warrants against them. They were accused of leading the ongoing Korea Railroad Corporation (Korail) strike - the longest in its 65-year history. The raid came after police received information alleging that some of the suspects were hiding at the headquarters of the umbrella labor union in central Seoul.

The court rejected the police’s request for a search warrant hours before the authorities smashed in through the front door and ransacked the KCTU headquarters, breaking windows and spraying tear gas. The intended targets of the invasion, however, were not there at the time.

The incident has raised doubts over the police’s ability to search for the whereabouts of the accused and execute their authority in accordance with law and principle. In the aftermath of the 12-hour raid, in which police deployed more than 5,000 officers, members of the KCTU yesterday decided to seek a damages suit and protest the Park Geun-hye administration for directing what they call “the execution of overreaching authority.”

“The police didn’t have any legal grounds to raid the building,” said Shin Seung-chul, president of the KCTU. “They mobilized an enormous number of armed forces, even though no one in the building has been accused or suspected. Those actions were intended to antagonize those in the labor circle as a whole. President Park Geun-hye should take responsibility for this.”

The labor organization accused the police of taking in nearly 120 members of Korail, the KCTU and the Unified Progressive Party who attempted to block their passage, adding that it will sue the authorities. The KCTU also decided upon an all-out strike to call for the resignation of President Park, which is set for Saturday, and other liberal-leaning civil organizations are expected to join the protest.

Despite condemnation, police maintained that they proceeded in a reasonable manner. “A series of investigations ... led us to conclude that union leaders had been in hiding at the center,” said Jeong Hae-ryong, the investigation director of the Seoul Metropolitan Police Agency.

“We resorted to searching the office to execute arrest warrants,” he said.

The whereabouts of the wanted union members are still unknown, but multiple media reports said that they left the headquarters hours before the police invasion.

The controversy also spiraled into the political arena, with the Democratic Party calling on the Blue House to apologize for the unwarranted raid in the building, which also houses the main office of the liberal Kyunghyang Shinmun daily newspaper.

“Law enforcement agencies have dismissed the rights to strike and destroyed the premises of a newspaper company, which amounts to a restriction on freedom of the press,” said Kim Gwan-young, a DP spokesperson. “President Park should stop dealing with social issues in a heavy-handed way. It is time for dialogue.”

The ruling Saenuri Party, however, argued that the police raid was justified. “The prolonged strike has taken a toll on passenger and freight services,” said Saenuri Party Chairman Hwang Woo-yea. “The search was part of efforts to execute arrest warrants, which was inevitable to reduce inconveniences associated with the strike.”