As tensions rise, soldiers on alert

As tensions rise, soldiers on alert 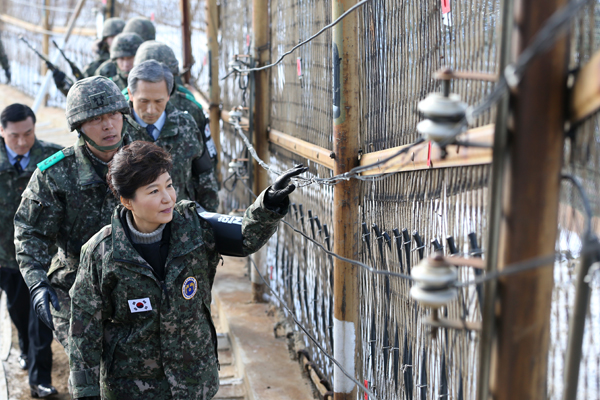 President Park Geun-hye walks along a barrier fence on Tuesday in Yanggu County, Gangwon, near the inter-Korean border. It was her first visit to a military unit since she took office in February. [Joint Press Corps]

North Korean leader Kim Jong-un warned that a war could break out “without any prior notice,” as South Korean President Park Geun-hye told her troops to “sternly retaliate against any provocations.”

Leaders of the two Koreas each made visits to their respective military units earlier this week and stressed the importance of staying combat ready. Following the latest purge in its leadership with the abrupt execution of Jang Song-thaek on Dec. 12, the North’s neighbors have been carefully watching for any signs of change in the Communist regime.

Kim visited a combat unit on Tuesday in Nampo, South Pyongan Province, marking the anniversary of his late father’s appointment in 1991 as supreme commander of the military, according to the country’s state-run Korean Central News Agency, which reported on his trip yesterday.

During his visit to the Command of Large Combined Unit 526 of the army, Kim instructed soldiers to strengthen their combat readiness, “always bearing in mind that a war breaks out without any prior notice,” the report said.

Kim was accompanied by the military’s emerging power elites - including Vice Marshal Choe Ryong-hae, the director of the Korean People’s Army Politburo, and Gen. Ri Yong-gil, the newly minted chief of the General Staff of the Army - and it appeared as though he was trying to give off the impression that his military leadership was stable and competent.

His trip came amid growing uncertainty surrounding North Korea, following the shocking purge of Jang Song-thaek, the uncle of the young ruler who was once considered his steward and the second-most powerful man in the regime. Jang was sentenced to death after being found guilty of treason, and Choe has since appeared to have filled Jang’s position.

Kim’s inspection of the military unit coincided with South Korean President Park’s trip to the Eulji Unit in Yanggu County of Gangwon, near the inter-Korean border, where she visited frontline soldiers.

It was her first visit to a military unit since she took office in February. She previously visited a special-forces unit in Gyeonggi on Dec. 31, 2012, as president-elect.

“If North Korea launches a provocation, you must sternly and ruthlessly retaliate to protect the country and the people,” Park said during the inspection. “I have complete trust in the military’s judgment and the decisions of the commanding officers on the field.”

During the inspection, she met with 60 commanding officers of the general outposts and acknowledged that the security situation on the Korean Peninsula has become grave.

“Internal security concerns in the North have risen, and there is a higher possibility that the North will stage provocations,” she said.

Park added that strengthened readiness is the best way to deter the North’s temptation to launch attacks and requested that they remain vigilant.

Since Jang’s execution, analysts have expressed concerns that Pyongyang could resort to provocative moves in order to divert public attention away from its brutal purge. Defense Minister Kim Kwan-jin previously stated that the North could initiate an attack between January and March next year.