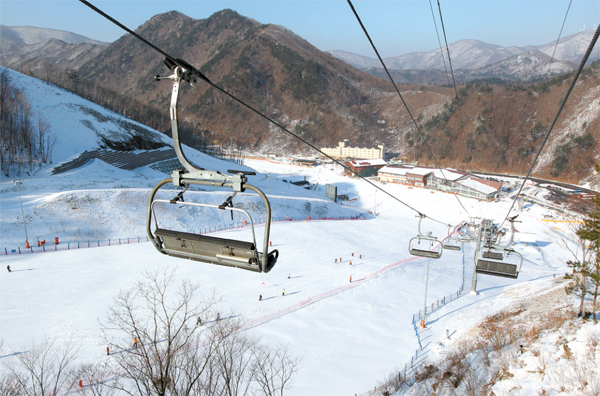 Out of the 12 ski slopes at the O2 Resort in Taebaek, Gangwon, only a handful of people were spotted earlier this month on the two hills designated for beginner skiers. An initial feasibility report was pessimistic about the resort’s prospects, but that conclusion was dismissed two months later. By Choi Jeong-dong

Out of the 12 ski slopes at O2 Resort in Taebaek, Gangwon, only a handful of people were spotted earlier this month on the two hills designated for beginner skiers.

The resort had approximately 300 visitors that day, the first Saturday of December, while High1 Resort in Jeongseon - about a 30-minute drive away - was flooded with more than 9,400 skiers.

Because tourists were limited last year, O2 Resort suffered about 20 billion won ($18.8 million) worth of losses. Adding in the money lost from its construction, and Taebaek Tour Development Company is now looking at 340 billion won of total debt.

Industry insiders claim the city-run company is on the brink of bankruptcy; if the organization goes under, the Taebaek City Government - which guaranteed 149 billion won worth of debt for the company - will face a severe financial crisis.

In fact, how the O2 Resort project got off the ground in the first place is somewhat astounding.

An initial feasibility report was pessimistic about its prospects, but that conclusion was dismissed two months later. The original report, created in 2003 by Dohwa Engineering and commissioned by the city, said the project wouldn’t be lucrative even 25 years after starting operations.

However, a second report, announced by the city government and Taebaek Tour Development Company two months later, gave a contradictory prediction that claimed investments would be collected after 15 years. The city’s report was similar to that of the one by Dohwa - summarizing the initial report but with its conclusion entirely reversed.

But Taebaek City is just one of several regional governments that are dealing with the consequences of failed demand forecasts. Hardly any major project pushed forward by local governments has had an accurate feasibility report. Since 2005, eight roads, bridges, light-rail transit systems and resorts - each with more than 100 billion won worth of investment - have been built by regional governments; however, none of them had accurate demand forecasts, and the actual use and benefit of these initiatives have remained far below local governments’ estimated projections.

In particular, they are taking a massive hit from projects carried out with private investors under contracts guaranteeing a certain minimum profit.

Private investors generally collect a percentage of fees or ticket sales after the infrastructure has been built; if sales are below forecasted demand, local governments often promise to make up for the difference. But, because these demand projections have been exaggerated in the beginning stages, local governments have almost always ended up paying back investors.

Of the eight projects analyzed by the JoongAng Ilbo, regional governments ended up paying back private investors a total of 263 billion won.

The Light Rail Transit in Gimhae, South Gyeongsang, was built with a price tag of 1 trillion won. It began operation in September 2011, with estimated daily passengers at 176,000.

Yet only an average of 30,800 - or 17.5 percent - uses the train every day. If the situation continues, the city governments of Busan and Gimhae will have to pay a total of 2.1 trillion won to a private investor, who has operating rights until 2031.

Gimhae Mayor Kim Maeng-gon protested the project’s implementation when he was a lawmaker at the time and claimed the state-run Korea Transport Institute extremely exaggerated its demand forecast.

“I complained to the central government about it,” Kim said.

However, former Mayor Song Eun-bok, who was in charge of the initiative at the time, rejected those claims.

“The Korea Transport Institute conducted an independent study,” Song said. “It’s absurd to say that the city lobbied the institute to push forward with the project.”

The institute was also responsible for the demand forecast for the Yongin Light Rail Transit in Gyeonggi. In that case, the province estimated that an average of 161,000 people would use the transport system daily. Operations began in April, but the actual number of passengers only ended up being 6.2 percent of that forecast.

Jung Chang-su, a professor of Kyung Hee University’s College of Humanities and the head of the national finance institute, said a major concern is that no one is taking responsibility for the current situation.

“Information on who pushed forward major projects of the regional governments and the details of profits and losses must be made public,” he said. “Legal grounds should also be established to hold the forecast providers and local government officials accountable for their failures.”

Meanwhile, officials in Taebaek have mostly turned a blind eye to O2 Resort’s original feasibility study, arguing adamantly that the project was supposed to be a success. They also denied doctoring any documents.

“From the beginning, the project was considered profitable,” one official claimed, adding that it was the first time he had heard about a negative feasibility study, despite that fact that the initial Dohwa report is stored in the city’s archives.

Hong Sun-il, Taebaek’s mayor at the time, also acknowledged that the O2 Resort project was considered promising and that he had no knowledge of an initial report.

“Because the initial report made it difficult for the project to move forward, the city government appears to have manipulated the numbers to improve its feasibility,” said the city council Representative Yu Tae-ho.

Yu said the officials who handled the project should be thoroughly investigated and held accountable for the changes in the feasibility reports, especially considering the financial damage the city has incurred from the project.