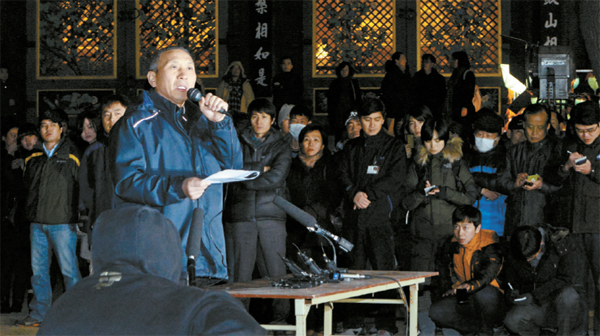 A leader of the Korea Railroad Corporation’s labor union took shelter at Jogye Temple in central Seoul on Christmas Eve to avoid being arrested by police for his role in the longest-ever rail strike.

Hundreds of policemen surrounded the temple, but they stopped short of entering the building itself a day after a violent and fruitless raid on the headquarters of the Korean Confederation of Trade Unions (KCTU).

The police have arrest warrants for 25 union leaders for waging a strike that the government declared illegal.

Park Tae-man, deputy union leader, fled to the temple at around 8 p.m. Tuesday with three other members of the union who are not wanted by the police.

“I ask [the religious community] to help resolve the standoff between the union and the government,” said Park at a press briefing yesterday evening.

The union said yesterday it did not have approval from the temple and apologized for the encroachment.

Spokesman Baek Sung-gon said it had no other choice but to ask help from a religious community known for “looking after underprivileged and keeping the conscience of society.”

Located near the Japanese Embassy in central Seoul, Jogye Temple is one of the most symbolic temples in the country. It has been perceived as a shelter from arrest by labor activists and is still considered off limits to the authorities.

In 2008, the leaders of a candle-carrying protest against imported U.S. beef avoided arrest for over 100 days in the temple. The use of the temple as a shelter by the Korail union leader has raised the prospect of a prolonged standoff between the union leaders and the police.

The temple will hold a meeting today to decide how to proceed.

Korail’s union is striking over the company’s plan to set up a company to run a new bullet train line. It says the plan is a stealthy privatization of the national rail service, which it vehemently opposes.

The government says the strike, which reached its 17th day yesterday, is illegal and the union’s motive is to maintain its own power in the railroad industry.

On Sunday, the police smashed in through the front door of the KCTU headquarters, breaking windows and spraying tear gas, to find the 25 union leaders. They weren’t there, and the police had earlier been denied a search warrant for the building.

A day after the 12-hour raid, President Park Geun-hye stressed sticking to principles in dealing with the matter.

“If we muddle through and compromise [over the strike] just because it causes trouble,” she said, “the future of our economy and society won’t be promising.”

The authorities’ unprecedented raid of KCTU headquarters attracted a lot of criticism for its violence and futility. Amnesty International yesterday condemned the authorities’ handling of the strike. Criticizing the raid on Sunday as a violation of “international human rights and labor standards in many ways,” the global human rights organization called on Seoul to “comply with international standards” and drop all “criminal charges” against union members.