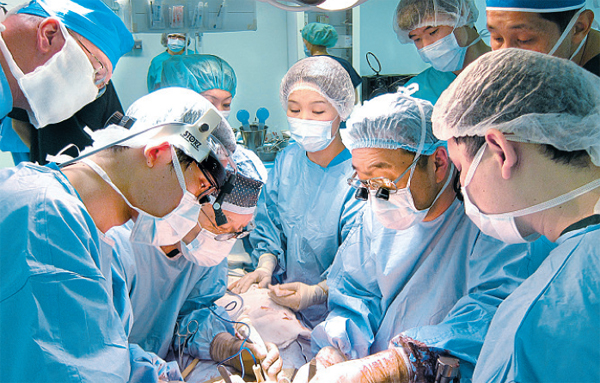 Dr. Lee Kwang-woong, a chief surgeon at Seoul National University Hospital, recently received an email from the head of a hospital in Almaty, Kazakhstan. The Kazak doctor asked to him to perform a liver transplant so his medical staff could watch and learn.

“I was really impressed with your expertise,” read the email.

During a seven day trip to Kazakhstan from Dec. 2 through Dec. 9, Lee and his medical team performed four liver transplants at the National Scientific Medical Research Center (NSMRC) in Astana, Kazakhstan. They were broadcast live to medical students in classrooms across the country, including the Almaty City Hospital.

Lee accepted the request, so he and his team will return to the Central Asian country next month. On their trip earlier in December, they earned $200,000 on top of their traveling expenses.

A growing number of Korean medical teams are going overseas to demonstrate complicated surgical operations, such as cancer excisions and organ transplants.

This year, other doctors from SNU hospital have conducted five other surgical operations at NSMRC in Kazakhstan, earning an additional $300,000.

The close cooperation between the two institutions began when three doctors from NSMRC visited the SNU hospital in 2011 for a three-month training program that was offered for free by the hospital. That link paved the way for continuing invitations by the Kazak hospital for surgical demonstrations by Korean doctors.

In the case of the United Arab Emirates, 382 patients, whose medical expenses were covered by the UAE government, came to Korea in the first 11 months of this year, up from 272 last year.

Korea’s growing profile in medical services was reflected in an agreement signed by the Ministry of Health and Welfare and its Saudi Arabian counterpart last April. Under the agreement, called the Medical System Twinning Project, Korea will be tasked with setting up specialized medical facilities in five Saudi cities and act as a main partner in the oil-rich country’s 10-year-project to improve its medical infrastructure.

To boost medical tourism, the Health Ministry opened a Medical Assistance Center for the Middle East in Itaewon-dong, central Seoul, on Monday to help foreign patients make a smooth transition to domestic hospitals. The center provides a so-called One-stop Service through which the government will arrange lodging, transportation and visa issuance all at once.