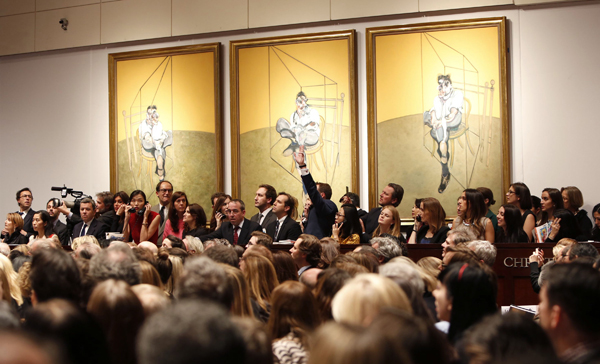 This Nov. 12 photo provided by Christie’s New York shows the bidding during the auction for the 1969 painting by Francis Bacon, “Three Studies of Lucian Freud” in New York. The most expensive artwork ever sold at auction is now on display at Portland Art Museum. [AP/NEWSIS]

PORTLAND, Oregon - The most expensive artwork ever sold at auction is on display at Portland Art Museum.

In New York last month, an anonymous collector paid more than $142 million for the “Three Studies of Lucian Freud’’ - a 1969 triptych by Francis Bacon. The museum is exhibiting the work for three months before it heads to the owner’s private collection.

Two drivers transported the panels across the country, ensuring the climate-controlled truck was always on the move and never left alone, The Oregonian reported.

GPS ensured the drivers didn’t veer off course and sensors attached to the three separate crates would signal excessive movement or temperature changes. Cameras and guards are on duty 24 hours, and the museum will add security if larger-than-expected crowds arrive.

“I’m thrilled,’’ chief curator Bruce Guenther told the newspaper late last week as workers finished hanging the work. “This is going to be so wonderful for the city. This is a town that loves figurative art.’’

Guenther, the only museum staffer who knows the owner’s identity, said he didn’t have to twist arms to land the record-breaking piece. He called the owner soon after the Nov. 11 auction. “This is an interesting notion,’’ the owner said, according to Guenther. “Why do you think we’d want to do that?’’

“That was an open door,’’ Guenther said.

No one has seen the work since 1999. Each panel has a warm, egg-yolk yellow background, and a green, textured foreground. In each, Freud, an artist and grandson of Sigmund Freud, sits on a chair inside a cage or room, right leg crossed over his left knee.

The piece went on view Dec. 21 and will remain so through March 30.