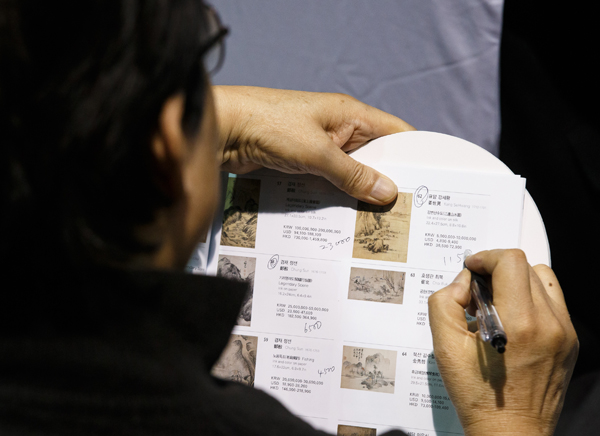 Art auctions are one of the channels through which the National Museum of Korea purchases its relics. This is a file photo of Seoul Auction on Dec. 18. [NEWS1]

Public interest in art auctions is higher than ever, thanks to the private art collection of former President Chun Doo Hwan and his family, which was sold at two art auctions in December.

The auctions were hits, rousing the intrigue of lovers of modern and ancient art.

The new owners of these works are unknown.

Art auctions are one of the three ways that the museum - which the country’s most important antiquities call home - purchase relics, sometimes including state-designated treasures.

The other two ways include open purchase, through which the museum places advertisements in newspapers seeking those interested in selling antiquities; and by recommendations, through which museum officials or potential sellers reach out to each other through their personal networks.

As the National Assembly’s Special Committee on Budget and Accounts is deliberating on the 2014 budget plan, the National Museum of Korea is pinning its hopes on a possible doubling of its annual budget for purchasing relics.

Should that happen, it would mean the best New Year’s gift possible for the museum, as the budget was on a downward trajectory from 2005 until 2009 and has been frozen for the past four years.

So, just how much money is allocated for the museum to buy antiquities?

“Our budget for purchasing relics is 2.8 billion won,” Kim Young-na, director of the National Museum of Korea, told the Korea JoongAng Daily. “It sounds like a lot of money, but it isn’t enough to buy one good piece of a ceramic jar.”

Pieces of ancient Korean ceramic jars - good ones, of course - are sold at prices between five and six million won, Kim said, with high-quality ones being sold for as much as 10 million won. This is also why some of Korea’s most representative and precious artifacts, like Buddhist paintings from the Goryeo Dynasty (918-1392) or a box for Buddhist scriptures, made of lacquerware and inlaid with mother-of-pearl, are rarely in the custody of the National Museum of Korea.

“The prices of relics are on the rise,” Kim said in an recent interview with a local newspaper, explaining why it’s an investment opportunity. “In the case of Japanese artifacts, many of them are in the market these days, and they are offered at a relatively low price due to the country’s economic conditions. So it’s actually a good time to buy. But we don’t have the budget. We are trying, though, to secure more money.”

Although not all of the best-quality relics must be in possession of the state museum, critics argue that it’s high time that the National Museum of Korea’s budget for buying artifacts is raised, as the Park Geun-hye administration has repeatedly highlighted the importance of flourishing the country’s culture. 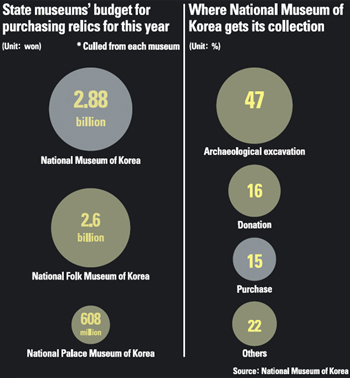 The reasons for their rarity are many. But the materials used is one of these factors - they are drawn or painted on paper. Also, the ensuing Joseon Dynasty (1392-1910), during which Confucianism was the state religion, sought to destroy the remnants of Goryeo and repress Buddhist culture.

The painting previously mentioned was sold to an anonymous bidder for 4.2 billion won. The National Museum of Korea obviously wasn’t the bidder, although sources say it was one of the items that it wanted to buy but couldn’t due to its low budget.

The museum actually had no Buddhist painting from the Goryeo Dynasty until 2010. That year, it held its first large-scale exhibition dedicated solely to Goryeo relics. One set consisting of three pieces was one of the items on display, on loan. The museum was able to purchase the pieces at a price roughly one-third of its annual budget for buying artifacts.

Last year, the country’s Treasure No. 585, “Handwritings by Two Masters, Toegye and Uam,” became available on the market. The book consists of paintings and writings, and the paintings in particular are from some of the most influential artists of the Joseon Dynasty like Yi Hwang (1501-70); Song Si-yeol (1607-89); and Jeong Seon (1676-1759).

It was sold at an auction in 2012 to the Samsung Foundation for 3.4 billion won. The National Museum of Korea said the item was another relic that it wanted to buy but couldn’t afford.

Museum officials can go on and on about the items they have missed. “The most difficult thing is that you never know when good pieces will become available on the market, so you can’t really plan ahead,” said Oh Sei-yon, a curator of the museum’s collections management department. 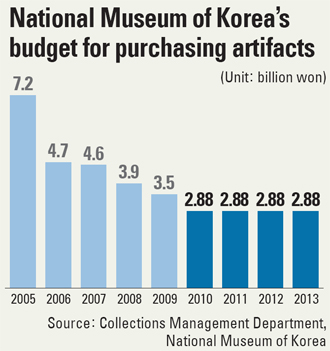 For the past four years, the National Museum of Korea’s budget for buying artifacts has been frozen at 2.88 billion won.

In 2005, the museum moved to its current location in Yongsan, central Seoul, from its previous location near Gyeongbok Palace. So, until 2005, or the years leading up to the relocation, the government set aside enough money for the museum. The year after the museum relocated, the budget was cut, museum officials said.

“It’s because the money is also for our envisioned relocation,” Jeong Yeon-hak of the National Folk Museum of Korea explained. “Within 10 years, our museum plans to move to another location due to the restoration project for the Gyeongbok Palace.” The museum is within the grounds of Gyeongbok Palace.

With the relocation, the museum is seeking to rededicate its mission to comparing folk cultures of different countries, Jeong said.

Oh Sei-yon of the National Museum of Korea said that of its collection - about 330,000 relics - only 15 percent of them have come from the purchases the museum makes, due to its limited budget. About half of them come from archaeological explorations, 22 percent come from donations, and the rest from other channels, such as confiscation.

For these reasons, museum officials say that compared to other collections, its paintings collection is the weakest. Paintings are rarely found intact from archaeological excavations. Things made from paper or wood are rare and are thus expensive. 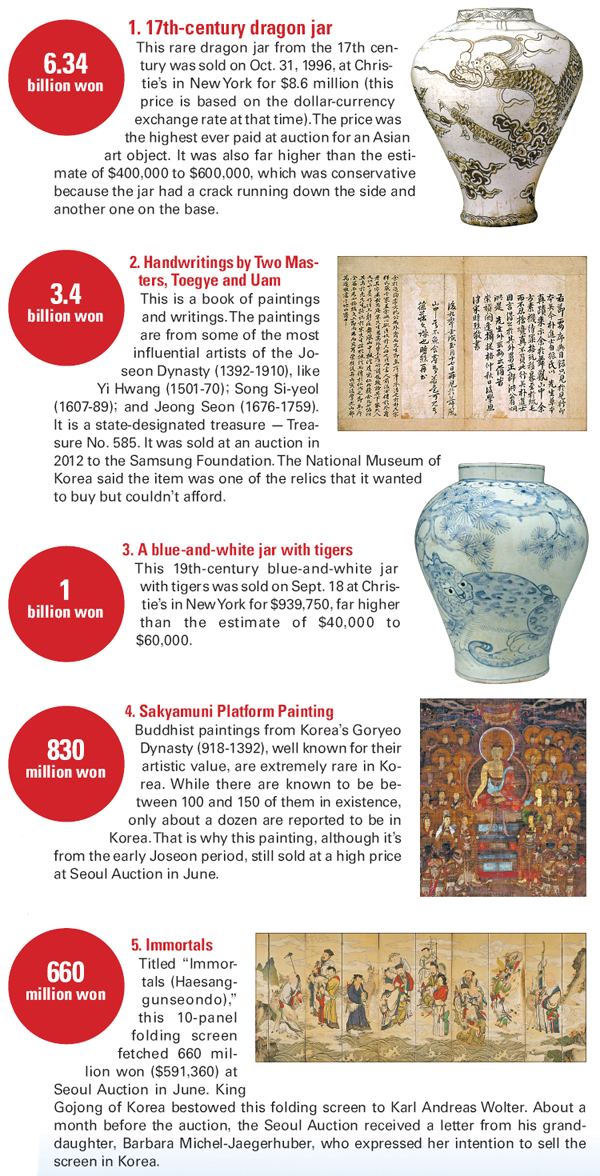 Officials from the ruling Saenuri Party and the main opposition Democratic Party met on Wednesday and agreed to pass next year’s budget bill on Monday. Of course, it remains to be seen whether the National Museum of Korea’s budget for purchasing artifacts will be doubled, as it aims.

However, some critics say the National Museum of Korea shouldn’t just wait for the government to give it more money for buying relics but should work on improving other channels of getting relics, like increasing donations.

“The state budget alone isn’t enough for buying artifacts,” Kim Jong-kyu, the chairman of the National Trust for Cultural Heritage and an expert in museum management, said in a recent interview with the JoongAng Ilbo. “There must be many donors [of artifacts]. And in order for that to happen, the country should give them honor and tax benefits. The government should revise laws and regulations that way.”

Kim Hong-nam, the former director of the National Museum of Korea and head of the National Trust of Korea, also said, “In the case of the Metropolitan Museum of Art, when a good item becomes available in the market, the first thing it does is hold a meeting of the board of directors and finds a benefactor.”

Then they meet the owner of the item and encourage a donation, she said, explaining that the U.S. government offers enough tax benefits when people decide to donate cultural properties. That has been the case since the John F. Kennedy administration, she said, which led to the heyday of museums in the United States.

“Basically, [the United States] bought artifacts with tax money and vitalized the museum culture,” she said, adding that tax benefits in Western countries can be as high as 60 percent of a person or an institution’s income.

Technically, there is a law in Korea that allows tax benefits - up to 30 percent - when a taxpayer donates artifacts to state organizations, according to No Yeong-in of the National Tax Service’s Corporate Taxation Bureau.

However, the law has been inapplicable until now, according to Lee Gyeong-su at the National Museum of Korea’s collections management department. “With relics, we estimate their value through a relics appraisal specialist. However, [the NTS] does not recognize that value. That is why we haven’t been able to offer tax benefits until now.”

Lee Heung-pyo of the Friends of the National Museum of Korea, a foundation that encourages donations to the museum, said “there were criticisms that the values were subjective and differed according to the appraisers.”

However, starting in January 2015, the state will recognize the appraised value of relics as the official amount of donations, which makes the National Museum of Korea hope donations will increase.

Even so, critics including Kim Hong-nam said that such regulations could be misused if fairness and transparency aren’t guaranteed. “There must be an institution that audits the process,” she said. “The members must change regularly and there also must be jurors. Only then, tax benefits won’t be misused.”

The National Museum of Korea moved to its current location in 2005. Since then, its relic-buying budget was decreased and then frozen.Provided by the museum