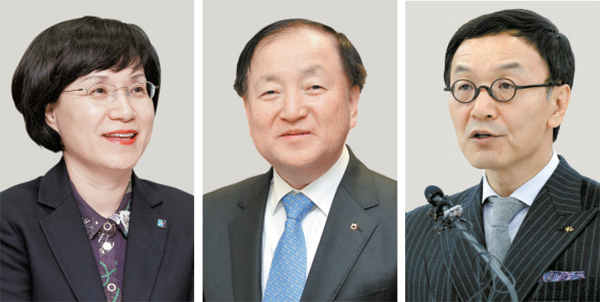 In the financial world, employees in charge of risk management are often compared to defenders in football because their major responsibilities are judging loan qualifications and evaluating credit worthiness.

A risk management official at a bank and a defender are similar in that what they do often goes unnoticed until there is a problem. For this reason, bank employees have been somewhat reluctant to take on risk management.

These days, however, this is changing with the rise of several risk management officials to top positions at local banks. They include Kwon Seon-joo, who was named new president of the state-owned Industrial Bank of Korea earlier this week, and Kim Ju-ha, who was nominated to be the new chief of NH Nonghyup Bank.

Kim from NH Nonghyup Bank is also an expert on the credit business. He was head of the credit system and credit evaluation before becoming vice president of NH Nonghyup Financial Group. He told the JoongAng Ilbo recently that he participated in coming up with a set of regulatory standards for the industry’s credit policy system in 1989 and has been in charge of risk management ever since.

Kwon, soon-to-be president of IBK, was also vice president of the bank’s risk management department for the past two years after more than 20 years in charge of credit evaluation.

“I believe credit evaluation is the most important business [for employees out in branches],” Kwon said.

In general, risk management at a financial institution includes evaluating loans, which involves determining the amounts and interest rates, and evaluating credit risk and supervising loans by monitoring the situation of loan recipients.

In the past, it was considered somewhat rare for a risk management expert to become company president.

“It was often the case that employees in planning departments or human resource departments were promoted to chief executive posts,” said a senior bank official.

Industry sources say risk management experts are in the spotlight because banks’ financial soundness and profitability deteriorated this year, and managing risk has become the prime concern. They note that banks, rather than launching new products and services, are more willing to overcome the current crisis by defending external risks.

There are also concerns over banks’ profitability at a time of low interest rates and economic growth. According to the Korea Institute of Finance, the net profit of banks this year is expected to be 5.3 trillion won, 40 percent down from last year’s 8.7 trillion won.

Meanwhile, focus on risk management for banks is likely to continue.

“We expect banks to continue to focus on improving their financial soundness and securing internal stability rather than expanding externally,” said an official from a local bank. “Risk managers will have to stand out their capabilities.”