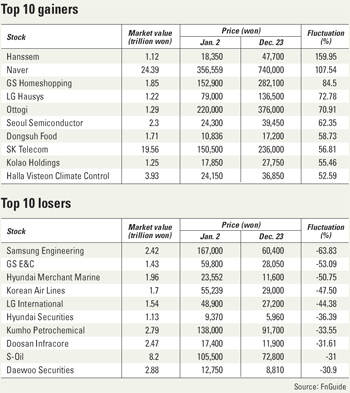 Among conglomerates with a market value higher than 1 trillion won ($944 million), furniture maker Hanssem, the nation’s largest web portal Naver and GS Homeshopping had the largest growth in share prices this year.

The benchmark Kospi dropped 1.7 percent to 1,996.89 points as of Monday, compared to 2,031.1 on the first trading day of the year, according to a study by FnGuide, a financial information provider.

Despite a stagnant construction market, Hanssem closed at 47,700 won Monday compared to the first trading day of the year on Jan. 2, when it closed at 18,350 won. The company focused on joint projects with regional interior construction companies.

By industry, conglomerates’ construction, shipping and securities subsidiaries declined. Samsung Engineering, which was at 160,000 won earlier this year, dropped to 60,000 won due to losses overseas, and GS E&C shares lost more than half their value. LG International and Korean Air Lines plunged more than 40 percent.

Among bluechips with a market value of more than 10 trillion won, shares of SK Telecom, the nation’s largest mobile carrier, showed the highest growth at 57 percent. The company also rose in market value to ninth place from 14th last year.

SK Hynix and Naver were two favorite shares of foreign investors this year.

Foreigners bought the chip maker’s shares in the first six months while dumping Samsung Electronics. They started to mass purchase Naver shares as soon as the web portal went public in August, after separating from game affiliate NHN Entertainment.

The influence of foreigners was remarkable. Eight of 10 shares in which foreigners invested heavily increased in value.

On the other hand, retail investors this year showed heavy purchases in Kodex, the exchange-traded funds that follow the Kospi 200 index. Retailers put a larger portion of their money in Kodex leverage.

Institutional investors favored the Kodex 200 the most with a strategy to follow the overall market flow, rather than pursuing returns. They favored bluechip shares such as Samsung Electronics, Samsung Life Insurance and Hyundai Mobis. In particular, they net bought shares of Korea Electric Power Corporation worth more than 600 billion won.