For 5th year in row, Heat beat Lakers on Christmas

For 5th year in row, Heat beat Lakers on Christmas 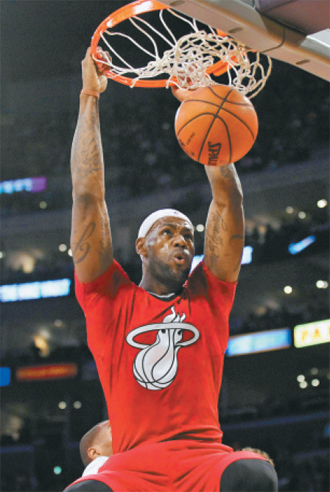 The Miami Heat’s LeBron James dunks against the Los Angeles Lakers during the first half at Staples Center on Wednesday. [USA TODAY/NEWS1]

Chris Bosh and Dwyane Wade had 23 points apiece, and the Miami Heat beat the Los Angeles Lakers, 101-95, on Wednesday for their sixth straight win.

Bosh also had 11 rebounds in the Heat’s fifth consecutive victory against the Lakers on Christmas Day. LeBron James added 19 points and Ray Allen had 12.

Miami shot 51 percent (41 for 80) from the field while improving to 7-0 against the Western Conference this season. It was its 19th straight win overall against West opponents.

Nick Young scored 20 points for the Lakers, who were tied four times in the fourth quarter. Los Angeles shot 42 percent (33 for 79) in its third straight loss.

Kobe Bryant was relegated to the sideline with his fractured left knee, leaving him unable to extend his NBA-record Christmas Day appearances to 16. Jodie Meeks had 17 points for Los Angeles, Xavier Henry scored 14 and Pau Gasol had 13 points and 13 rebounds.

It’s a place that Bryant’s unaccustomed to being on the holiday. He leads the NBA with a record 15 appearances on Christmas Day, but he’s out an expected four to six weeks with a fracture in his left knee.

“It’s strange to be coming in on Christmas and not playing,” he said before the loss. “It’s a foreign feeling, but I’m here to support my guys.”

Bryant’s injury was diagnosed last week, his second major one of the season. He didn’t play his first game until Dec. 8 after nearly eight months away while recovering from a torn Achilles’ tendon. Then he got hurt again Dec. 17 at Memphis while playing his fourth game in five nights.

Jordan Farmar returned from a left hamstring tear after missing 10 games, giving the Lakers a true point guard to run the offense. But he was ineffective, with three points and two assists in 32 minutes.

The Lakers stayed right with the Heat despite their poor shooting and the absence of Bryant, Steve Nash (nerve root irritation) and Steve Blake (right elbow). They led by 10 points and never trailed by more than that.

Young’s basket tied the game for the last time at 83. The Heat then went on a 13-5 run. Wade, Norris Cole and James scored all of the Heat’s points.

Young answered with his fourth 3-pointer of the game and Meeks made 1 of 2 free throws to pull the Lakers to 96-92 with 1:26 to play. But Wade had an acrobatic reverse layup and James made two foul shots to give Miami some breathing room. Young scored 12 points in the third, when the Lakers trailed by nine before scoring the final seven points of the period, capped by Young’s 3-pointer, to trail 76-74 heading into the fourth.

Allen and Wade combined to score the Heat’s first 13 points of the second, with Allen hitting 3-pointers to bookend the run and pull the Heat into a 34-all tie. Bosh took over and scored 10 points in a row, including a layup that gave Miami just its second lead of the game, 40-39. James interrupted Bosh’s offensive spurt with a one-handed dunk off Wade’s fast-break alley-oop before Bosh made three of four free throws to extend the Heat’s lead to 51-41. The Lakers scored the final two baskets to trail 51-46 at the break. AP