Business not cheery about 2014: KCCI

Business not cheery about 2014: KCCI 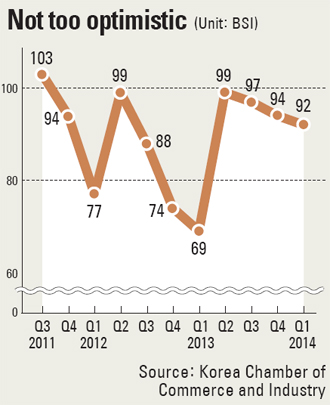 Local manufacturers’ business sentiment hovered below 100 for the 10th consecutive quarter according to the Korea Chamber of Commerce and Industry, reflecting a lack of optimism about the local economy next year.

The Business Survey Index of 2,500 manufacturers registered 92 for the first quarter of next year, the KCCI said yesterday. That marked the 10th quarter in which it was below 100 since it fell to 94 in the fourth quarter of 2011 from 103 in the previous quarter.

If the index is less than 100, companies with a negative outlook of the economy for the upcoming quarter outnumber those with a positive outlook.

“Despite the improvement of some macroeconomic indexes and a forecast of more than 3 percent growth for the Korean economy by major institutions at home and abroad, businesses do not appear to have a high expectation of economic recovery,” said the KCCI in a statement.

Conglomerates were less pessimistic than smaller companies. The BSI for the large companies stood at 97, three points higher than the previous quarter.

The figure for the small and mid-sized enterprises fell to as low as 91.

“We expect the economy to revive next year, lifted by a gradual recovery of the global economy led by advanced countries,” said Chun Su-bong, an executive director of the KCCI.

Chun called for government support for businesses, citing some challenges from recent changes in economic circumstances at home and abroad that could weigh on companies, such as the tapering of quantitative easing in the United States and a Supreme Court ruling that will lead to a new definition of base salaries at Korean companies.