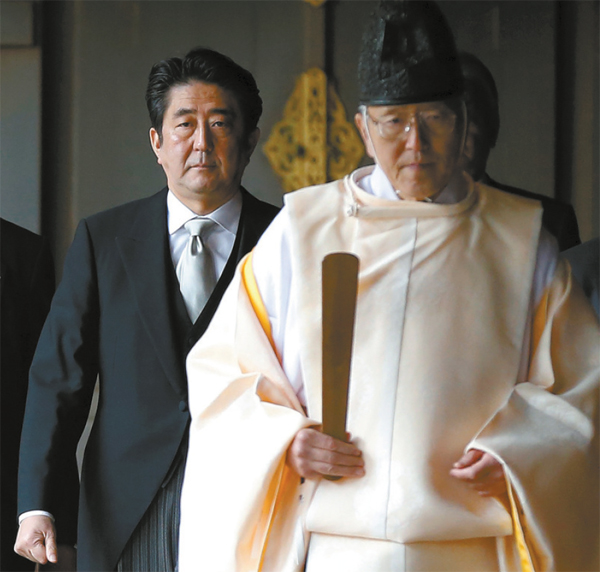 Diplomatic ties with Japan, which were already in a deep freeze, seemed certain to bottom out after Prime Minister Shinzo Abe visited the controversial Yasukuni Shrine and Seoul angrily questioned the true intention behind Tokyo’s increasingly aggressive defense and foreign policies.

Abe paid his respects at the shrine, which honors the country’s war dead, including convicted Class-A war criminals from World War II, around 11:30 a.m. yesterday. The shrine is regarded by Japan’s neighbors, particularly Korea and China, as a symbol of Japan’s brutal military past.

The visit, the first by a sitting prime minister since Junichiro Koizumi’s in 2006, sent immediate diplomatic shockwaves across Korea, China and other Asian neighbors, as well as the United States, which has discouraged Japanese leaders from such insensitive visits.

“The Korean government cannot repress its shock and rage over Abe’s visit to the Yasukuni Shrine, which glorifies Japan’s past colonial aggressions and military invasions and honors war criminals,” Culture Minister Yoo Jin-ryong said yesterday in a statement as the South Korean government spokesman.

Calling the shrine “an anti-historic facility that honors unforgivable war criminals who inflicted indescribable pain and suffering on the Korean people,” Yoo said the visit clearly showed Abe’s wrongful view of history. Yoo said it was an “anachronistic act that destroys not only Korea-Japan relations but also stability and cooperation in Northeast Asia.”

The Korean government questioned the true intention behind Abe’s so-called proactive pacifism, a new defense policy in which Japan seeks to build up its military under the justification of playing a greater role in international operations.

“We have to ask if he actually thinks Japan can contribute to the promotion of peace with such a wrongful perception of history,” Yoo said. He said Japan should first build some trust with the neighbors it brutalized before and during World War II by facing its militaristic past and offering sincere apologies.

It was rare for a special spokesman for the government to issue such a strong rebuke. Until now, the Foreign Ministry usually responded to Japanese leaders’ and lawmakers’ shrine visits.

Seoul also appeared to be sending a message to Washington by stressing in the statement that Hideki Tojo, who was directly responsible for the attack on Pearl Harbor in 1941, is honored at the Yasukuni Shrine.

“The prime minister’s visit is more provocative than 100 lawmakers’ visit,” said a senior Seoul official. “It’s not only the Asian countries that suffered under Japan’s militarism, but the entire international community that will have to question Japan’s proactive pacifism.”

After paying respects to the war dead, Abe held a press conference to justify his visit. “Unfortunately, a Yasukuni visit has largely turned into a political and diplomatic issue,’’ he said.

Although Abe insisted that the visit was not a political move, it took place on the first anniversary of his second inauguration as Japan’s leader.

“I have no intention of neglecting the feelings of the people of China and South Korea,” he said, adding that he wants an opportunity to explain his position to Korea and China.

While the Japanese cabinet said Abe was making the visit in his private capacity, he arrived aboard an official government vehicle and signed his name in the visitor’s log with the title Prime Minister. Vice Foreign Minister Kim Kyou-hyun yesterday summoned Takashi Kurai, the deputy chief of the Japanese Embassy in Seoul, and delivered a strong complaint.

“We are warning clearly that Japan will be responsible for any consequences triggered by Abe’s visit,” Kim told Kurai. “We have serious doubt about Abe’s proposal for dialogue. Abe’s statement, announced after his shrine visit, also lacks sincerity.”

According to the Foreign Ministry, Japan notified the Korean Embassy in Tokyo about the visit in a phone call one hour before Abe headed to the shrine. South Korean Ambassador Lee Byung-kee immediately protested and the Korean Foreign Ministry also warned the Japanese Embassy in Seoul to stop the visit, but Abe went ahead. Government sources said Seoul is mulling stronger responses. It may recall Ambassador Lee and cancel Korea-Japan vice-ministerial talks scheduled for next month.

Abe maintains extremely hard-line stances in his foreign and defense policies. The Abe government has declared it wants the right of “collective self-defense,” meaning it can come to the aid of an attacked ally, despite Korea’s strong opposition.

Abe has also displayed conspicuous insensitivity to neighboring countries by attempting to dismiss the Kono Statement of 1993, through which Japan issued an apology for its systematic sexual enslavement of thousands of girls recruited from Korea and other neighboring countries during World War II.

Although Abe has publicly made a number of proposals for a summit with President Park Geun-hye, his hard-line stances have deterred Park from sitting down with him.

Korea-Japan relations have deteriorated since Abe and Park both started their terms in 2013. Park chose China as the destination of her second overseas visit, following a trip to the United States. In the past, Korean presidents have visited Japan after the United States and China came third.

“Right now, Abe is justifying Japan’s past militarism and there is no way for us to show a conciliatory gesture,” Kwon Chul-hyun, chairman of the Sejong Foundation and former Korean ambassador to Japan, told the JoongAng Ilbo. “The two countries need a cooling off period.”

China also reacted with fury yesterday. “The Chinese government expresses its strong indignation over the behavior of the Japanese leader, which grossly tramples on the sentiments of the Chinese people and other Asian peoples victimized in the war and openly challenges the historical justice and human conscience, and lodges a strong protest and severe condemnation against the Japanese side,” the Chinese Foreign Ministry said in a statement.

The U.S. also lamented Abe’s act. “Japan is a valued ally and friend,” the U.S. Embassy in Tokyo said in a statement. “Nevertheless, the United States is disappointed that Japan’s leadership has taken an action that will exacerbate tensions with Japan’s neighbors.”