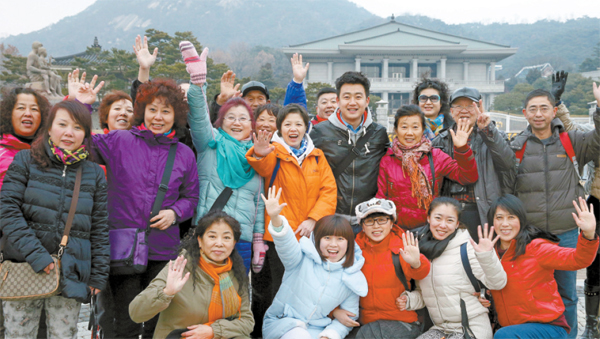 Chinese tourists take a group photo yesterday in front of the Blue House in Seoul. The number of Chinese visitors to Korea is expected to surpass the number of Korean visitors to China by the end of this year. By Kim Sang-seon

Despite the cold winter weather in Seoul, about 20 Chinese tourists gathered around the statue of King Sejong yesterday as part of their visit to the city.

“My friends who recently visited Korea recommended I take this trip to Seoul,” said Zhao Liping, a 40-year-old Chinese woman who had her two sons in tow. “These days, Korea is the most popular tourist spot in China.”

According to statistics by Korea’s Ministry of Justice and the Ministry of Foreign Affairs, about 3.6 million Chinese tourists visited the country this year as of November. “[Considering the numbers], we estimate the number to exceed 4 million by the end of December,” a Justice Ministry official added.

The number of Chinese visitors to Korea has skyrocketed over recent years - almost two times 2 million, the figure recorded for 2011. Chinese tourists to Korea also surpassed Japanese visitors, who only numbered about 2.5 million.

However, in the meantime, the number of Korean tourists to China is estimated to decrease a bit to 3.96 million this year, down from just above 4 million. 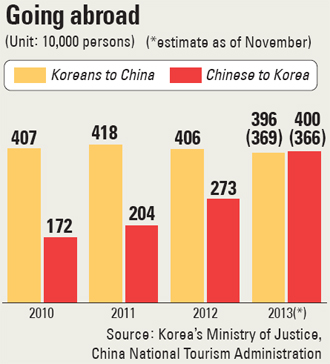 If this trend continues, the number of Chinese visitors to Korea would exceed that of the Korean tourists to China for the first time since the two countries officially established diplomatic ties in 1992.

“We receive compliments from the foreigners who used the no-visa entry policy [for foreigners in transit, which allows up to a 72-hour stay] since they entered Korea through the Incheon or Gimhae international airports,” said Kim Dong-cheol, a Justice Ministry official in charge of immigration information. “Additional services for Chinese tourists - like dispatching Korean officials in charge of issuing visas to China - appear to create a synergy effect that draws more Chinese visitors.”

“Starting May, we adopted an express visa service, which decreases the time it takes to get a visa from five days to two days,” added O Jin-hui, an official at the Korean Foreign Ministry.

“The demand for tickets from China or to China has steadily grown,” said Gu Eun-gyeong, an official at Korean Air. “In July, we even opened a new route between Busan [in Korea] and Nanjing [in China].”

To accommodate the increasing number of Chinese tourists, more Korean vendors in Myeong-dong, a shopping hot spot in central Seoul, are hanging promotional signs in Chinese.

Additionally, AmorePacific, a popular Korean cosmetic brand that has 18 shops in Myeong-dong, has 195 sellers, 67 percent of which are Chinese.