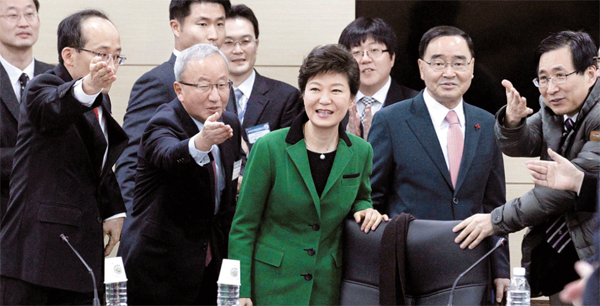 President Park Geun-hye, center, is ushered into a conference room in the Sejong Government Complex yesterday where she presided over a meeting to discuss economic policies. [Joint Press Corps]

The Korean government is confident about the economy for 2014 and announced two main goals: to revive the domestic market and create jobs for young people and women.

The Ministry of Strategy and Finance yesterday announced its macroeconomic plans, projections and priorities for next year.

The ministry set its GDP growth target at 3.9 percent for 2014, slightly higher than forecasts by the Bank of Korea, International Monetary Fund and the Organization for Economic Cooperation and Development.

It set a goal to create an additional 450,000 jobs, mainly for women and young people, to raise the employment-to-population rate to 65.2 percent, which is still far short of the 70 percent goal of the Park Geun-hye administration.

“Although there are signs of recovery and steadily increasing jobs, we have numerous tasks piling up in order to make people feel the recovery,” said Hyun Oh-seok, deputy prime minister for economic affairs, at a press conference in Sejong. “We are at a crucial crossroads to determine the fate of our economy. We have to solidify economic fundamentals and swiftly respond to changes.” 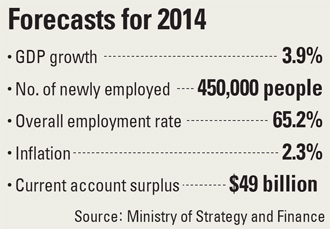 “Sejong, a new home for economy-related government branches, is the No. 1 home for the economic policies of Korea,” Park said. “We hope to see another miracle, or a quantum jump, in Sejong.”

It was the second time this year that Park visited the new administrative city, or mini-capital, in South Chungcheong.

Backed by accelerating recovery in the U.S. economy, the government forecast a gradual improvement in the Korean economy throughout the year.

To bolster anemic growth, the ministry will maintain the current expansionary monetary and fiscal policies in the first half of the year. The ministry also predicts the global economy will grow pretty well in the second half of 2014.

The Finance Ministry set a goal to boost private consumption by 3.3 percent.

“Consumer confidence has been generally positive, but burdens of housing costs have been a major hindrance to boosting consumption,” a ministry official said.

This year, private consumption grew 1.9 percent from a year earlier.

To jazz up the domestic market, the government will focus on improving the comatose real estate market and encouraging private businesses to make investments.

Given the rising number of home owners converting jeonse contracts into monthly rental contracts, the government will raise the upper caps on the percentage of income tax deductions for housing rents from the current 50 percent to 60 percent. The maximum amount of deductible taxes will be 5 million won ($4,739) a year.

For couples who earn less than 70 million won a year and want to buy a residence, the government will expand the profit-sharing mortgage program, introduced in the Aug. 28 real estate plan. Since the launch of the program in early December, 1,668 households applied for mortgages. The government’s goal is to complete 15,000 applications by early next year.

According to a survey conducted by the ministry, 54.1 percent of 1,291 respondents, including 1,000 ordinary citizens and 291 experts, said stabilizing the livelihoods of working-class people should be the top priority for the government next year. Job creation (40.6 percent), economic recovery (31 percent) and improvement of the property market (24.5 percent) followed.

The government aims to ramp up investments in facilities by 6.2 percent next year by removing regulations. It has designated start-ups, new growth engines (bioengineering, pharmaceuticals and renewable energy), regional investment and foreign investment as four key sectors that it will push for investment into in the next year.

For young people, the government will help them find jobs by creating programs that connect academic courses with businesses.

“It is notable that we have remarkably low youth employment rate compared to other OECD countries,” said Kim Cheol-joo, director general for economic policy at the Finance Ministry. “Next year, the government’s job creation will be focused on youth and women.”

The government will select 1,000 companies early next year and start the program in the second quarter. The program will be mainly for high school graduates and two-year college students who have the hardest time getting jobs.

To encourage women with kids to work, the government will revise the law to allow child care leave for female employees with children up to the age of eight.

The current law only extends to kids up to the age of six.

“Next year will be a crucial year for the Korean economy to either get back on a normal track or fall into a deeper slowdown,” Kim said.

Analysts say it is desirable for the government to keep the expansionary economic policies but are skeptical about the government’s growth forecasts.

“The 3.8 percent growth forecast is quite a realistic goal, but downward risks like the U.S. tapering of quantitative easing and Japan’s Abenomics, which continues to weaken the yen, will remain next year, making it challenging for Korea to reach the goal,” said Lee Jun-hyup, a research fellow at the Hyundai Research Institute.