Bells and beaches to usher in the New Year

Bells and beaches to usher in the New Year

We all know that the New Year won’t really be different from the previous year. People make lists of New Year’s resolutions, as usual, but then their willpower gives out after a few weeks or days and they return to their old habits.

Nevertheless, most people want to look back on the past year and ring in the new one in a special way. That’s why the roads around famous sunrise viewing points turn into massive parking lots each Jan. 1 and the seedy inns there raise their rates to 300,000 won ($284) for the night, up from their usual 50,000 won.

If you are looking for something fun to do to welcome in the New Year, here is a list.

Jeongdongjin in Gangwon, left, has become synonymous with sunrises in Korea, while the five-meter-high “Hope Mailbox,” center, is in Ganjeolgot, Ulsan. Ganjeolgot is the first place on the Korean mainland where you can watch the first sun of the New Year. Eulwangni Beach in Incheon, right, is the most accessible place to watch the sunset near Seoul. [JoongAng Ilbo]

First started in 1953, counting down to the New Year at Bosingak in Jongno, central Seoul, is probably the most common way to ring in the New Year.

Although the bell-ringing ceremony begins at midnight, people pour onto the streets of Jongno as early as 1 or 2 p.m. and go to any lengths to watch the bell ringing from the best location. Some even climb trees in the area or sit on nearby rooftops.

For those who want to spend the evening in Seoul, buses will extend their operating hours until well into the night.

If you don’t mind shivering in the cold and being squashed by other revelers, go to Jonggak Station, where the Bosingak Bell is located.

But if you prefer to enjoy the bell from a warm location, the best place is the Jongno branch of Pizza Hut, located right across the street from the bell, with a decent view from the second floor of the restaurant, which has huge glass windows.

But there are strings attached. You have to reserve seats in advance and order specific set menus. For example, the 57,500 won menu is required for two people and the 96,100 won set must be bought for four people. The four-person menu includes a large pizza, four servings of salad, two sides, pasta, a chicken dish and two coffees. If you need more information, call (02) 737-8065 (Korean only).

Other restaurants around Bosingak also offer similar set menus on the last day of this year. The bar and restaurant Bekseju Village, run by Kooksoondang Brewery, has a good view of the back of the great bell. It also has an all-you-can-eat and all-you-can-drink menu for 65,000 won per person, which includes jeon (Korean pancakes), assorted fried dishes and soup.

As of press time, there were still seats available at both restaurants.

Until recently, the bell at Bosingak was only rung on New Year’s Eve, struck 33 times by the president and a few selected people.

But now the bell is open to regular folk who get to ring it every day from Jan. 2 to Dec. 24 (except Mondays). However, only four people are selected each day, so you need to apply on the Seoul city website at culture.seoul.go.kr. (The website is in English and other languages, but the application is Korean only.) 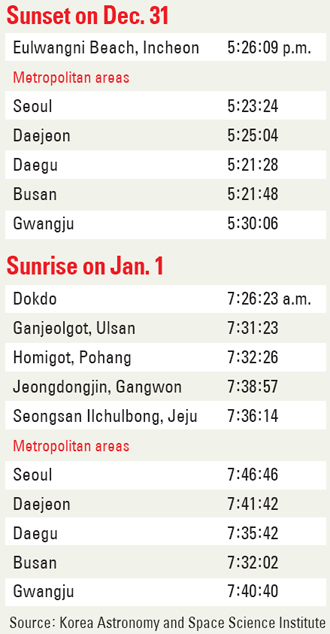 Watching the last sun of the year

For the sunset, the nearest recommended place to Seoul is Incheon.

Of many sunset viewpoints in the port city, Eulwangni Beach is probably the most accessible, taking only one and a half hours from central Seoul by car. But because of its accessibility, the beach is always crowded.

The sun sets at Eulwangni at 5:26:09 p.m., and when the sun goes down, the sandy, 700-meter (766-yard) beach, dotted with pine trees and huge rocks, is tinged with crimson. When the weather is right, the sunset is second to none, but some may find the beach too commercial because of the numerous restaurants, cafes and motels densely located there.

Ganghwa Island, a large island with many places to watch the sunset, which is just north of Incheon International Airport, is also recommended as a sunset destination. Of those viewing places, Nakjo Village in Janghwa-ri is always packed with amateur photographers - no surprise as the village’s name means “sunset” in Korean.

Nakjo is also famous for its endless mud flats, considered the best in Korea. When low tide coincides with the sunset, the disappearing sun reddens the entire mud flats and the sea. Unfortunately, this year high tide peaks at 4 p.m., so not much of the mud flats will be visible by sunset at 5:26.

But the area is less commercialized compared to Eulwangni Beach, so sunset here will be much quieter.

A sculpture of a hand rises out of the sea at Homigot, Pohang. [JoongAng Ilbo]

The first sun of the New Year

The first sun of the New Year will be observed at the Dokdo islets at 7:26:23 a.m., but traveling to the rocky islets is not easy at all.

Ganjeolgot is also famous for its five-meter-high mailbox, called the “Hope Mailbox.” You can write down your wishes for the New Year and your letter will be delivered to your home.

Homigot in Pohang, North Gyeongsang, is another favorite destination for the sunrise. What makes this sunrise point different from others is its signature “hands of harmony” sculpture - the right hand rises out of the sea while the left hand comes out of the land nearby. When the sun comes up, watching the sun’s rays through the fingers of the hand is spectacular.

But the most popular sunrise viewpoint in Korea is probably Jeongdongjin, located in Gangneung, Gangwon. Since Jeongdongjin’s small train station was featured in the 1995 hit drama series “Sandglass,” this site has become synonymous with sunrises in Korea.

Without a thick pine forest or huge rocks, there is nothing special about the sunrise at Jeongdongjin, but the beach still attracts about 300,000 people annually on the morning of New Year.

To get to Jeongdongjin Station, there is a Mugunghwa train that departs from Cheongnyangni Station at 11:15 p.m. and takes about five hours. After getting a few winks of sleep on the night train, you will arrive in time to watch the sunrise. Plus, taking the night train means you don’t have to pay for accommodation, so it is cost-effective, too.

In order to purchase train tickets, visit www.korail.com or www.korailtravel.com.

Last, but not least, Seongsan Ilchulbong Peak on Jeju Island cannot be left out. The peak overlooks the sea east of Jeju and is always frequented by travelers. Since it takes 30 minutes from the entrance of the park to the top of the peak, you need to set out early to make it in time for the sunrise.