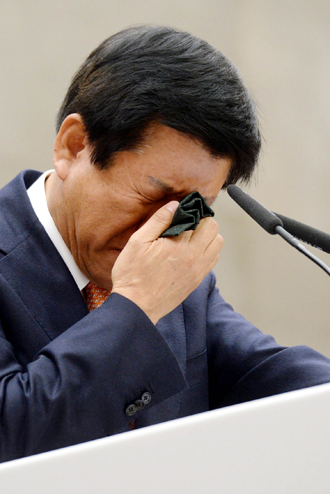 Industrial Bank of Korea (IBK) President Cho Jun-hee sheds tears during his last speech to employees at the bank’s headquarters in central Seoul yesterday. Cho was well-respected amongst many employees as he was the first among them to be promoted to the highest rank at the financial institution. During the speech, Cho said he tried to improve conditions for staff during his three-year term as he was clearly aware of the problems of excess work. He asked IBK management to continue to improve the work environment so employees would look forward to coming to the office on Monday.

IBK attracted more than a million new customers annually for the past three years, as it aggressively supported small businesses. Corporate clients have also grown to more than 1 million. [NEWSIS]