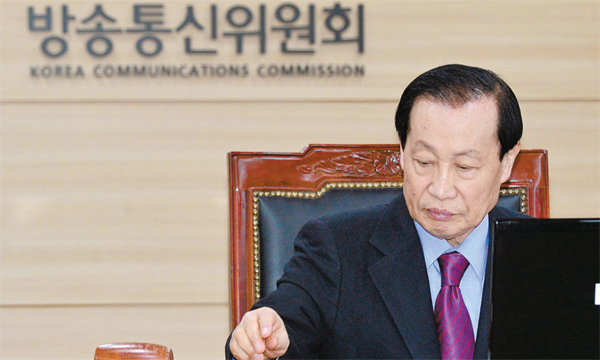 The Korea Communications Commission yesterday imposed a record 106.4 billion won ($100.9 million) in fines on the country’s three major mobile operators for giving excessive subsidies to buyers of mobile phones in a competition to lure customers.

But the broadcasting and telecommunications watchdog fell short of handing down a business suspension against SK Telecom, as it did with KT early this year.

It is the largest combined fine ever faced by the local mobile operators. The KCC imposed 66.96 billion won in fines against the three companies in July. The Ministry of Information and Communication had regulated the mobile industry before the creation of the KCC in 2008, but the ministry’s largest total fine was 73.2 billion won on four companies (KTF merged with KT in 2009).

Industry guideline requires the mobile carriers to subsidize no more than 270,000 won toward the purchase of a mobile phone. KCC said it became aware of excessive subsidies between May 17 and July 16, and Aug. 22 and Oct. 31, and conducted an inspection between Oct. 23 and Dec. 13. 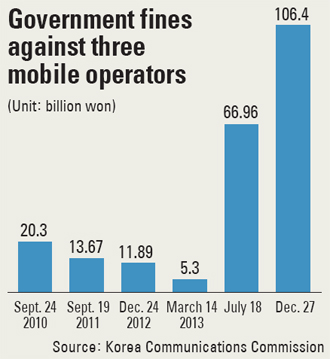 “The three mobile operators were confirmed to have breached the benefits of the users by unduly providing discriminatory handset subsidies,” the KCC said in a statement.

It was the third time this year that the KCC fined the three companies. It imposed 5.3 billion won in fines on March 14.

The KCC sometimes imposed a business suspension, but to raise the efficiency of the penalty it would consider suspending only the worst-offending company. It put the warning into practice in July, suspending KT from recruiting new subscribers for seven days beginning July 30, on top of a 20.24 billion won fine.

In its announcement yesterday, the KCC did not determine which carrier was most at fault, although it gave the highest number of penalty points, 73, to SK. KT received 72 points and LG U+ 62.

KT said it “humbly” accepts the KCC decision to impose fines, but did not shy away from expressing its discontent with the KCC for not making the “exemplary punishment” of suspending SK.

“It could have been more helpful for stabilizing the market,” said an official of KT.

More than 60,000 subscribers of KT moved to SK Telecom and LG U + during its seven-day suspension between July and August.

A senior official of the KCC told reporters the KCC made an interim decision to give at least a two-week suspension to the company most at fault, but dropped it when there was only a one point difference between SK and KT.

SK said it is still unhappy about the KCC decision.

Yang Jong-in, a senior analyst at Korea Investment and Securities, said the KCC is still giving an effective signal that it is determined to oppose heavy subsidies.

“The KCC could pull out the card of punishing one company anytime, so the mobile operators will try to adhere to the rule more than they used to do,” Yang said.