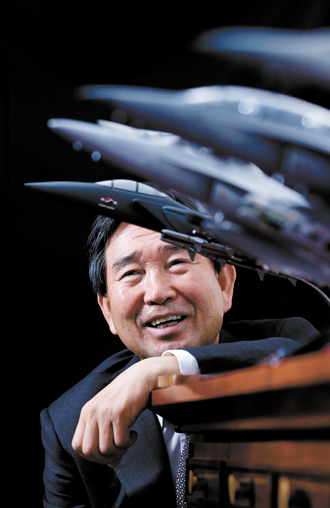 Ha Sung-yong, CEO of Korea Aerospace Industries (KAI), poses on Dec. 16 in front of various models of FA-50 lightweight attack jets which will be exported to Iraq. By Kwon Hyeok-jae

“The Iraqi prime minister,” recalls Ha Sung-yong, CEO of Korea Aerospace Industries (KAI), “seemed impressed after seeing me in a bulletproof vest and with bodyguards.”

Ha, a 62-year-old law school graduate who also has finance expertise, was relating how he managed to clinch a deal to sell 24 Korean-made T-50IQ fighters, lightweight attack jets based on the indigenously built T-50 Golden Eagle, to Iraq.

Ha insisted on personally flying to Iraq, despite its ongoing violence and sectarian strife, to meet with high-ranking government officials in person to sell them on the virtues of the Korean jets.

The bulletproof vest he wore weighed more than eight kilograms, or 17.6 pounds.

The estimated $1.13 billion contract doesn’t include pilot training and maintenance or other systems needed for the operation of the aircraft. They are expected to boost the deal to a total of $2.1 billion over 25 years.

The T-50 sales to Iraq, signed on Dec. 12, is significant for Korea because it can open up the Middle East market.

It is widely known that KAI believed the future of the company depended on winning the Iraq deal. The United Kingdom, the Czech Republic and Russia were also bidding for the Iraq deal. Until a trip by Iraqi Prime Minister Nouri Kamal al-Malaki to Korea in 2011, things were believed to be going smoothly for KAI.

Iraqi government officials didn’t even want to meet KAI officials last year. The KAI CEO flew to Iraq with no definite appointments and begged them to listen.

Ha almost gave up, but the Iraqi government changed its mind at the last moment.

Ha emphasizes the importance of the aerospace industry. The United States keeps its aerospace industry as a top secret because of the cutting-edge technologies involved, unlike the automobile industry, for which the U.S. doesn’t mind Japanese, European and Korean competition.

The Korean government forecasts the domestic aerospace industry would grow from $2.7 billion last year to $20 billion by 2020. The current number of employees in the industry is around 10,000, and that is projected to rise to 70,000 by 2020. Under those projections, Korea would have the seventh-largest aerospace industry in the world.

KAI currently produces the only supersonic advanced trainer jet, the T-50, the propeller trainer jet KT-1 and a twin-engine, transport utility helicopter, the Surion. The T-50 jet was initially made for training, but it is now configured in various forms of low-class fighter jets: the T-50B, TA-50 and FA-50. (The FA-50 fighters exported to Iraq are technically called T-50IQs.)

It can produce almost any type of jet except for large fighters and passenger aircraft.

In this interview with the JoongAng Ilbo, Ha describes the state of Korea’s aerospace industry.

A. The T-50IQ jet to be exported to Iraq is a reconfigured form of the T-50. While the T-50 is the only supersonic trainer in the world, the T-50IQ is a trainer jet that is equipped with radar, missiles, bombs and machine guns, so it can be also used as a fighter in an emergency. To Indonesia, we exported the first supersonic advanced trainer made with our own technology. To Iraq, we are going to export the first fighter-class aircraft. It is even more significant that we have established a bridge to the Middle East to export our own aircraft.

How could you think of going to Iraq without any official meetings lined up?

It was not an easy game, although there were a few favorable signs. A competitor spread rumors that our aircraft were having problems and that KAI wouldn’t be able to meet delivery dates. On hot days over 40 degrees Celsius [104 degrees Fahrenheit], I had to wear an eight-kilogram bulletproof vest and go with bodyguards equipped with machine guns to roam around Baghdad. Before the meeting with the prime minister, I was sweating like a bull, and I looked like a homeless person with crumpled shirt and trousers. I think I impressed Iraqi officials because I dared to hang out in Baghdad while our competitors were too afraid to visit the city. Korea’s Defense Acquisition Program Administration and Air Force supported me a lot. We can call it a success of Korea.

How do you assess the Korean aerospace industry?

Korea was the 12th country in the world to develop a supersonic trainer. Israel and Taiwan, known to have advanced munitions industries, failed to build such a jet. KAI also has technology enabling the development of middle-class fighter jets that will be able to replace the current KF-16. If the KFX business is approved, Korea will be a country that can build all types of jets with its own technologies. This will help slash costs and time for maintenance.

We have our own technologies to build the Surion, which is supplied to the Army, and technologies to make small attack helicopters and marine helicopters, too. We even produce wings of F-15 jets, the world’s top fighter, and bodies of Apache helicopters. We also produce parts for Boeing-787s and A-320s. We export about $800 million worth of parts every year. We are taking small steps now but the pace is accelerating. We have a bright future.

Do you mean Korea has top-class technologies?

Yes, we do. Korean conglomerates forecast a bright future for the aerospace industry even in the 1970s. Samsung, Hyundai and Daewoo built plants in Sacheon, Changwon and Seosan and poured fortunes into developing related technologies, despite deficits every year. In the awake of the Asian financial crisis in the late 1990s, aerospace subsidiaries of the three companies were merged into one: That is KAI. Investments over a 30-year-period are now yielding good results.

As a law school graduate, how did you become CEO of KAI?

I was involved in the creation of KAI. Personally, I wanted to become a law professor. I was waiting for acceptance for a PhD degree in September 1977 when my professor suddenly passed away due to high blood pressure. I changed my course and entered Daewoo Heavy Industries as a financial manager.

In 1999, when KAI was created, I was dispatched as a representative of Daewoo. At the time, KAI had no money. I had to beg bankers. When the T-50 was completed, the situation got little better. This year, we reached 1.9 trillion won ($1.8 billion) in sales and 120 billion won in profits. I was appointed vice president in 2010. And I became the CEO in May after spending two years as a president of Sungdong Shipbuilding & Marine Engineering.