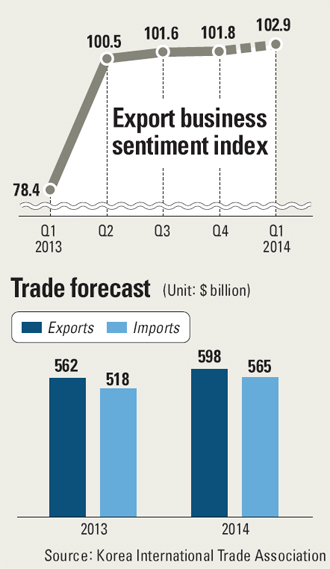 Korea’s exports look primed to enjoy a good start to next year, backed by increasing exports of ships, home appliances and automobiles, according to a report by the Korea International Trade Association yesterday.

According to a survey of 968 local exporters, the export business sentiment index for the first quarter of 2014 recorded 102.9. A rating above 100 signals that more exporters are positive about trade conditions in the future, while an index below 100 indicates a negative outlook.

The report said that local exporters expected to have talks with buyers and sign deals, leading to an increase in operations.

It also indicated, however, that exporters will continue to register low profitability throughout the year, mainly due to the appreciation of the Korean won and uncertainties in the global economy. Production costs of exported goods could also remain a burden.

The report said exports of ships and home appliances will lead the overall growth in exports next year.

Ship exports are expected to increase, bolstered by the recovering global economy in the new year, the report said.

Automobile exports were given a bright outlook by the report due to consistently increasing global demand and enhanced marketing efforts by local automakers in countries where Korea has signed free trade agreements.

On the other hand, exports of fisheries, rubber and leather products, agricultural products, petrochemical products, plastics and textiles are expected to have a tough year, all registering an index score lower than 100.

The appreciating won led concerns, cited as the biggest difficulty by 21 percent of the surveyed exporters. The sluggish economies of trading partners followed, with 16.6 percent of respondents, and rises in raw material prices, also by 16.6 percent.

The Korean won’s value against the U.S. dollar has been consistently appreciating over the past five months, rising from 1,123 won to the dollar on the first day of August to 1,053.9 won on Friday.

The 1,050 won mark is considered by the government to be the lowest level acceptable to protect local exporters’ profitability.

“It is forecast that the beginning of 2014 will be quite favorable for local exporters,” said Shim Hye-jeong, a research fellow at the Institute for International Trade at KITA. “But U.S. tapering of its quantitative easing and the weakening Japanese yen will remain as major causes of uneasiness.”

The trade surplus increased from $28.3 billion to $44 billion over the same period, mainly led by higher prices of semiconductors and new Korean-made smartphones.

Despite the global slowdown, Korea was the world’s seventh-largest exporter, surpassing $1 trillion in trade volume this year.

The institute projects exports will record $598 billion in 2014, up 6.4 percent from this year, with imports climbing 9.1 percent to reach $565 billion, giving Korea a trade surplus of $33 billion.