All I want for Christmas is... to help you

All I want for Christmas is... to help you 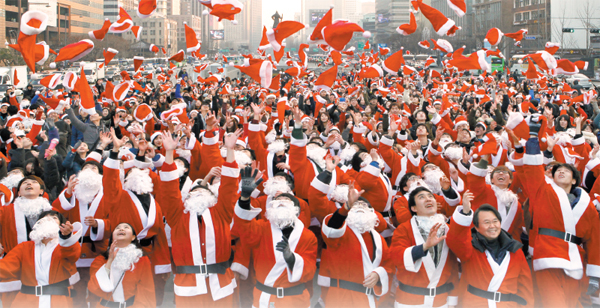 “Secret Santas” gather in Gwanghwamun, central Seoul, on Dec. 24 before delivering Christmas presents to children in need. By Park Sang-moon

It was 4 p.m. on a windy, hazy Christmas Eve at Gwanghwamun Square in central Seoul, and about several hundred young Santa Clauses, along with hundreds more Santa-hat-wearing volunteers, were lining up, ready to dash off into the night with their precious presents. Some were tightly tying bags full of gifts for children, while others practiced their dance routines to a medley of Christmas carols, like “Rudolph, the Red-Nosed Reindeer” and “Santa Claus Is Coming to Town.”

But these Santas did not have sleighs and reindeer to deliver their Christmas presents. They were taking subways and buses to visit a total of 1,004 children in and around Seoul who may not otherwise have had the opportunity to enjoy receiving an armful of Christmas presents.

These Santas were young Korean volunteers, aged 22 on average, according to the organizers, who teamed up for the “Secret Santa Project.” Instead of spending time with their loved ones in the warmth on the festive evening, they donated their time and money to help children in need.

Christmas and the year end tends to stir something in our better natures. In Korea, too, the season has long been a time for charity and volunteering.

In the past, delivering charcoal briquettes for heating or sacks of rice to senior citizens who live alone in poor neighborhoods was a common end-of-year ritual for many companies and volunteers. But these days, the younger generation is increasingly taking an active interest in sharing and giving during this festive season, and thanks to the spread of social networking sites like Facebook and Twitter, there are more ways for people to give than ever.

The “Secret Santa Project” started in 2006 by the Korea Youth Foundation with just 100 Santas, but it quickly grew. Since 2009, around 1,000 volunteers gather via Facebook each year to become secret Santas for less fortunate children every year on Christmas Eve.

Prior to Christmas Eve, the volunteers receive training at Santa School, learning everything you need to be a good Santa or Santa helper, from how to “ho, ho, ho,” like a real Santa to making flowers and animals out of balloons and learning dance routines to various Christmas carols.

The organizers research to find children to receive presents each year and then purchase gifts for them from their own pockets or which are donated by sponsors.

From left: Delivering briquettes to the elderly who are living alone is a conventional volunteer activity for the year end.[JoongAng Ilbo]: Volunteers deliver instant noodles and sacks of rice.[JoongAng Ilbo]: Secret Santa and his helpers deliver Christmas presents to Lee Eun-young, 10, on Christmas Eve. By Park Sang-moon: Young volunteers look for more unconventional ways of volunteering and one of them includes walking abandoned dogs. By Park Sang-moon

After gathering at Gwanghwamun Square, the volunteers split into groups of five or six, each with one Santa and several helpers, and set off to visit the children on their lists.

One group of six volunteers got on the subway and traveled for about 40 minutes to Myeongil Station in Gangdong District, on the far eastern side of Seoul, for their first child, a 9-year-old named Lee Eun-young.

Eun-young was signed up for the Secret Santa Project by her teacher at the Semteo Regional Children’s Center, which is operated by a church. In the letter, the teacher said Eun-young has “always been the weak child of the family, but she is lovely. Her parents have been studying theology and have no regular income. The child’s mother has been working part-time at different places. Financially they are in a very difficult situation and are considered a lower-income household by the government. Moreover, two months ago, the child’s parents separated and she needs emotional stability at this moment.”

Kim Min-ki, 29, this group’s Santa, and other volunteers stealthily entered the Semteo Center, where Eun-young is cared for in the evening until her mother can pick her up.

Eun-young was taken by her teacher to a side room where the volunteers were waiting, all except for Santa. They gave her one gift, sang and played with her for a bit before asking if Eun-young had ever seen Santa before. When she said no, they told her to try calling him.

“Ho, ho, ho!” said Kim, a convincing Santa Claus, as he entered the room. “I heard you’ve been a good girl this year.”

Eun-young jumped in surprise. “Are you for real?” she screamed.

“Eun-young, since you’ve been a good girl this year, I am giving you this present,” said Santa Claus. “And I’m giving you one more present so that you can be a good girl next year too. Can you do that for me?”

Lee nodded in her joy and grabbed the two presents, promising not to open them until she gets home.

After saying goodbye to Eun-young, the group stepped into the cold again, with another half-hour trip ahead of them to their second child, but they all looked pleased.

“I don’t feel the cold any more,” said Kim Ji-hyun, who was one of the secret Santa helpers and is also a member of the planning team for the Secret Santa Project. “This is why I choose to be with these children on Christmas Eve.” The group delivered presents to four children that evening, not finishing until around midnight.

“Most of the Secret Santas that are here today are university students and young workers in their early 30s,” said Kim Byung-whu, director of the Korea Youth Foundation and a psychiatrist who frequently appears in the media. “The ways of volunteering for our younger generation are becoming more diverse. They are eager to care for people but want to do it in their own way. That’s how the Secret Santa Project was launched.”

That same evening, a group of friends in their 20s held a flea market at a small cafe in Cheongdam-dong, southern Seoul. They’ve collected used goods for two weeks using Facebook, selling second-hand clothes, shoes, books and more for no more than 10,000 won ($9.50) each.

“Until last year, I just registered for delivering coal briquettes at the end of the year, to elderly people living alone,” said Kang Kyung-ho, 25, who has been volunteering for four years. “But I wanted to try something different, something where I can put in my whole heart and donate the money or goods to where I really wanted.”

Kang raised about 500,000 won that evening and is still deciding whether to donate the cash or buy goods and donate then to Muldendongsan, a center for disabled children, where he donates regularly.

For those who are eager to volunteer, another popular option is helping animals, like abandoned dogs.

On the afternoon of Dec. 19, three volunteers in their 20s met up in front of the Center for Abandoned Dogs in Dapsimni, eastern Seoul. They did not know each other, but they shared a concern for abandoned dogs, and so volunteered to walk the center’s dogs for two hours. Afterward, they eat at a vegan restaurant on the ground floor of the center for 10,000 won through Jipbap, a social networking service that gathers people to eat together after engaging in shared activities.

“I’ve always wanted to do such volunteering work for abandoned dogs but found it difficult to do alone,” said Kim Ji-woo, 27, who’ll be graduating from university in February. “So when I saw this gathering at Jipbap, I registered for it. Coming here with others who share the same interest, even though they are strangers, encouraged me to participate.”

The group walked six dogs for two hours, taking out two dogs at a time while carrying waste bags and tissues to clean up after the animals. Among the dogs they were helping that evening were Kkamang, a 50-kilogram (110-pound) Saint Bernard who can be difficult to control, and a mixed-breed named Prada. Prada was too afraid of cars to walk on his own, so Kim had to carry him and find an alleyway where Prada would run around.

When a white terrier named Snowy was waiting to cross the street, a man came along to try to pet the dog, but it turned fierce and scratched the man’s finger. The man cursed the dog, calling it dirty and demanded compensation for the scratch.

Kim Kyung-ae and Kim Tae-hwan, the two 25-year-olds who were walking Snowy, gave him the number to the Center for Abandoned Dogs, along with their numbers, just in case the dog was carrying a disease, as the man insisted.

“It’s not an easy job, walking the abandoned dogs, as they all seem to have suffered trauma of some sort or tend to be quite fierce,” said Kim Kyung-ae, who studies international relations at Kyung Hee University. “But I heard there is a shortage in helping hands at these centers and these poor dogs have no one to take them out, so they can walk in the fresh air.”

Kim says she’s been interested in volunteering for many years and even participated in the Secret Santa Project last year.

“These days, most of my friends are looking for unconventional and unique ways of volunteering,” said Kim. “Donating money at a Salvation Army kettle or delivering briquettes is still a good form of helping during this season, but I think young people want something more unique. I also wanted to do something different this year and found out about abandoned dogs in desperate need of care and love. I can’t adopt them, for too many reasons, but at least I can walk them, despite the cold weather.”

Kwak Geum-ju, a psychology professor at Seoul National University, said that the ways of volunteering, giving, and even donating money, are changing in recent years, as the younger generation is increasingly eager to share while performing such activities.

“Donating money in a Salvation Army’s kettle for young people, for example, it’s difficult for them to witness where their money is going,” said Kwak.