An end to Abe’s diplomatic life

An end to Abe’s diplomatic life 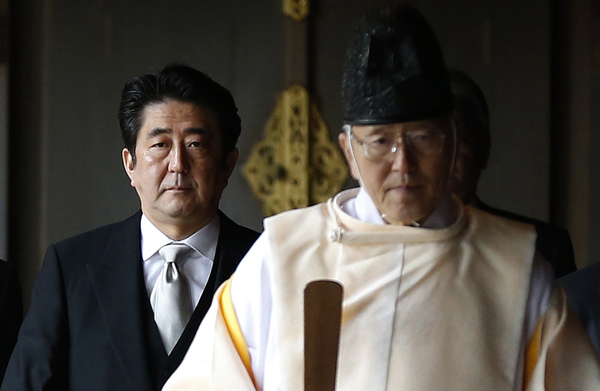 On Dec. 26, Japanese Prime Minister Shinzo Abe seemed relieved as he entered the main hall of Yasukuni Shrine. As the Japanese government was eager to get media coverage, the press was allowed to the courtyard of the main hall, and the reporters were less than one yard away from the prime minister. The slow steps, relaxed shoulders and firmly clenched fists show that Abe was proud to have finally made the visit.

As I observed Abe at Yasukuni, I thought of President Lee Myung-bak during his visit to Dokdo in August 2012. He, too, seemed relieved, as if a heavy load had been lifted. His face showed a kind of accomplishment and satisfaction. Lee Myung-bak in Dokdo and Abe in Yasukuni are similar, not just in their facial expressions but for the aftermaths of their visits.

Firstly, both leaders advocated economic recovery and pragmatism at the beginning of their administrations. President Lee Myung-bak presented an economy-first principle, with the so-called 747 vision: 7 percent annual economic growth, $40,000 in per-capita national income and one of the top seven economies in the world. He didn’t want to give up future relations because of the past so emphasized pragmatism in relations with Japan. Abe is not much different. He focused on the soft landing of Abenomics, stimulating the economy by releasing money into the market. He made a few gaffes, but he postponed the Yasukuni visit and remained reserved in foreign policy.

But both Lee and Abe made sudden moves that did not lead to any substantial benefit. When Lee Myung-bak was cornered by the corruption charges against his family and friends, he chose to visit Dokdo. While Dokdo is obviously Korean territory and he was following his conviction, Lee could not gain anything from the visit. Abe’s approval rating, which soared after the successful launch of Abenomics, plummeted with the special secrets bill. He tried to bounce back with the Yasukuni visit, but it was the worst possible move, hurting relations with China and Korea as well as with the United States. Even some ruling party members said Abe was out of his mind.

Their styles are similar. They toured the world to sell nuclear plants and emphasized their “sales outcomes.” They made all the decisions on their own. In the process of visiting Dokdo and Yasukuni, the foreign ministries of Korea and Japan were excluded. Both leaders did not listen to the advice not to make the visits.

Lastly, both Lee and Abe drove Korea-Japan relations to their nadir. Lee’s Dokdo visit temporarily cheered Korean citizens, but, for nearly a year and a half, diplomacy with Japan virtually stopped functioning. Just as the Foreign Ministry officials in Korea and Japan worked so hard to revive relations, Abe totally ruined the possibility by visiting the shrine. While his supporters rejoice, many believe that Abe’s diplomatic life has virtually ended. It is a tragedy for all of us.