Once in a ditch, Ssangyong’s on recovery road

Once in a ditch, Ssangyong’s on recovery road 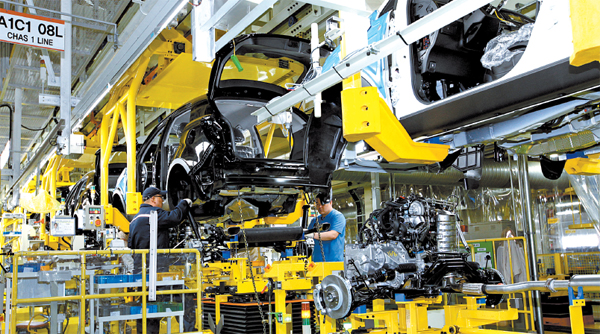 Workers assemble the New Korando C at Ssangyong Motor’s plant in Pyeongtaek, Gyeonggi. In 2013, the company recalled laid-off workers and added a night shift. Provided by the company

Plagued by massive layoffs and sluggish sales, Ssangyong Motor in the past seemed to be a company with a gloomy future. Not any more.

Today the automaker, now owned by India’s Mahindra & Mahindra, is approaching its heyday with steadily growing sales and solid management. In particular, Ssangyong sees 2013 as a turnaround year that will be a springboard to profitability and making the company a happy place to work, an image it wants to embed in public consciousness.

Ssangyong sold 132,378 vehicles (including complete knockdowns) through November, up 21.6 percent from a year ago. It sold 57, 386 units in Korea for impressive year-on-year growth of 35.6 percent, the highest of any Korean carmaker.

Industry insiders say that with a growing population of outdoor activity and leisure lovers, Ssangyong has reaped the fruits of its effort to brand itself as an SUV specialist.

The company was also the only local automaker to increase domestic sales in the first half of 2013, and it is now Korea’s fourth-largest automaker, surpassing Renault Samsung Motors.

“This sales growth was driven by the successful launches of face-lifted models that reflect customer needs, such as the New Korando C,” says Ssangyong Motor CEO Lee Yoo-il. “Our differentiated marketing strategies such as the Driving School event and aggressive efforts to pioneer new markets to prepare for global economic uncertainties were also effective.”

This year, it has sold 51,379 units with the August introduction of the new Korando C, the face-lifted version of the original Korando C. While enhancing various aspects of the original, from conveniences to design features, Ssangyong also improved its after-sale service, extending the warranty for the new Korando C from two years or 40,000 kilometers (24,855 miles) to three years or 60,000 kilometers for the body and general parts.

Besides the Korando family, the Rexton W was also a hit. The company sold 6,784 units of the premium SUV in Korea through November, a 51.3 percent increase from a year earlier, while 6,758 units were sold overseas, a 30.2 percent jump. What’s promising for Ssangyong is that not only are domestic sales doing well, but exports are growing, and the company is aggressively marketing abroad.

Ssangyong’s largest export volume was in 2011 when it shipped 74,350 units (including complete knockdowns). In the first 11 months of this year, it surpassed that figure by selling 74,992 units overseas.

Currently, slightly more than half of its overseas sales are in Russia and South America. In the future, the company aims to get 29 percent of its overseas sales from Western Europe and 30 percent from India and China. Ssangyong said it hopes to sell its vehicles in 120 countries by 2016, compared to 110 at present.

As part of the plan, Ssangyong announced a global launch of the New Korando two months ago to generate sales in the European and Chinese markets.

In Europe, the automaker hopes to sell models with manual transmission, which is preferred by 60 percent of customers. Ssangyong said that the new Korando C gasoline model will be sold in Europe, along with the diesel model that is already available in Korea.

In China, the company announced it would expand its dealer network from 80 to 100 by the end of next year. Along with the New Korando C, it sells the Korando Turismo and Rexton W, which also includes a model with a 2-liter (0.53-gallon) engine.

“We made vigorous efforts to enhance our brand awareness in global markets by participating in international auto shows and strengthening our network,” Lee says.

With these strong sales, the company posted an operating profit of 700 million won in the third quarter after returning to profitability in the second quarter.

Although its cumulative operating income through the third quarter was negative 13.6 billion won, that represents a big improvement compared with the 66.7 billion it lost last year.

Signs of improvement can also be seen on the production line.

In May Ssangyong announced the revival of night-shift work for the first time in four years at its plant in Pyeongtaek, Gyeonggi, in response to strong demand.

Ssangyong hadn’t had night shifts since 2009 after going through court receivership and massive layoffs. It previously operated production lines from 8:30 a.m. to 5:30 p.m., but a graveyard shift was added from 9 p.m. to 7:30 a.m.

Not only was there more work, but 2013 was the year Ssangyong saw a revival of unity and passion in its workforce as 454 employees were reinstated in March after three years of unpaid leave. The company this year also finalized a wage agreement smoothly, without industrial action, marking its fourth consecutive strike-free year.

Ssangyong hopes to continue the momentum next year with more progress toward being a profitable company. The first step will be preparing the successful development and launch of its new X-100 SUV.

Ssangyong’s Pyeongtaek plant has an annual production capacity of 240,000 units and currently operates at slightly more than half of that.

According to Lee, the automaker will be in the black if it can sell 170,000 vehicles a year. The 69-year-old president previously said that the automaker should be able to sell 200,000 units in 2015 after the new model debuts.

Ssangyong said the goal is achievable because it looks like more support is on the way from Mahindra, which acquired the largest stake of the company for $463.6 million in 2010.

Pawan Goenka, president of Mahindra’s automotive and farm equipment divisions and chairman of the board of Ssangyong, recently said the Korean automaker will invest 1 trillion won over the next three to four years in order to introduce three new products by 2017. He also said Mahindra would support Ssangyong with further investment if required.

With the increase in sales, Goenka also hinted that a partial reinstatement of workers laid off in 2009 could happen in near future, but he emphasized that it should not be done for political reasons.