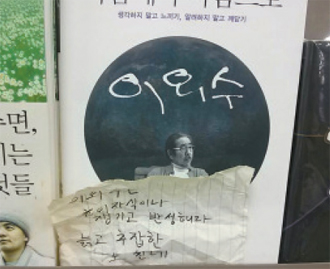 An anonymous note defaming novelist Lee Oi-soo was found on Dec. 1 at a bookstore in Sanggye-dong, northern Seoul. Provided by the bookstore

A deepening schism among people with different political beliefs that began online is spilling over into other arenas, stoking concerns that Korean society’s tolerance for different viewpoints is at risk.

A case in point can be found at a bookstore in Nowon District, northern Seoul. In the past two months, the bookstore has found anonymous notes defaming authors either inside of or attached to books. The books being targeted are mostly written by liberal-leaning authors such as Moon Jae-in, the Democratic Party’s candidate in last year’s presidential election.

The bookstore owner told the JoongAng Ilbo that he began to see defamatory notes in October attached to liberal critic Rhyu Si-min’s book, “A 246-minute Talk by Roh Moo-hyun and Kim Jong-il,” which details the 2007 summit between the two and is intended to rebuke claims that the former president disavowed the Northern Limit Line in the Yellow Sea during the summit. Rhyu served as a former welfare minister under the Roh government.

Similar offensive notes were also found attached to Moon Jae-in’s recent book, “1219: The End Is the Beginning,” defaming Moon and the late Roh, for whom Moon served as presidential chief of staff.

Another note containing profanity was found inside the book, “A Reunification in 10 Years,” written by Chung Dong-young, a former unification minister under the Roh administration and an advocate for improved inter-Korean relations.

The bookstore owner, who asked not to be identified, said he suspects a man in his 20s left the notes.

“If I catch him leaving such notes on site, I will make sure he does not enter our store again,” the owner said.

Similar incidents have also happened in other major bookstores in Seoul.

A 30-year-old worker named Kim Su-hyung found a note inside a book by Moon Jae-in that he had bought in October. The note says, “Don’t read a book like this.”

“We have customers bringing in notes they found inside books several times a year,” said Jung Do-won, who works at a bookstore in Eunpyeong District, northern Seoul.

The recent incidents in which disgruntled people whose political views differ from liberal figures do something to target authors’ books has been called “ideology terrorism.” This occurs regularly on Internet portals with strong political leanings. Profanity on sites such as the rightist-portal Ilbe (an abbreviation of Ilgan Best) against political figures, including former presidents, is rampant.

Some members of the Ilbe site uploaded pictures of “Are you okay?” posters they had torn off bulletin boards at university campuses, drawing public criticism for their undemocratic behavior.

Students at more than 100 universities and high schools nationwide put up such posters, addressing a range of social issues, such as dirty tricks by state institutions in last year’s presidential election and the country’s ultra-competitive education system taking a toll on students.

Allegations that Ilbe users purchased movie tickets for “The Attorney” in bulk and sought refunds just minutes before the viewing in a bid to prevent others from seeing the movie also went viral last week. “The Attorney” is a movie that depicts the life of former president Roh in the 1980s, when he was a human rights lawyer defending student activists and joined the pro-democracy movement against the Chun Doo Hwan military government.

“Such incidents [involving ideology terrorism] represent a form of vandalism, which refers to a behavior that seeks to inflict damage on people and objects with different political and social beliefs,” said Lee Jae-hyun, a professor of journalism at Seoul National University.

“And these incidents that have taken place in recent days are thought to be done by ultra-rightists who try to draw attention to their offline action.”