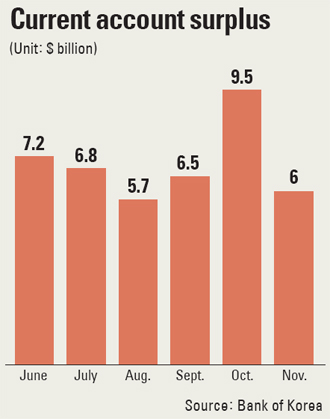 The current account surplus for the first 11 months of the year not only surpassed the Bank of Korea’s target but hit an all-time record.

Although last month’s current account surplus shrunk compared to the same period last year, as exports saw a sharper drop than imports, the surplus for the first 11 months amounted to $64.3 billion, exceeding the $63 billion that the central bank had projected for the entire year.

And the surplus far outstripped the previous record set in 2012, $48 billion.

Although the accumulated surplus in the current account has been reaching new heights, the monthly current account surplus has been wobbly, raising concerns that the economy’s growth might be derailed, especially with the weakness of the Japanese currency threatening Korea’s competitiveness in the global market as the U.S. central bank starts reducing its stimulus program.

The goods account surplus, which is the difference between exports and imports, fell not only compared to a year ago but also compared to the previous month

The biggest reason was because exports saw a sharper drop than imports. Exports fell nearly 2 percent to $48.8 billion while imports dipped 0.2 percent on-year to $42.6 billion.

But exports of steel plummeted 17 percent on-year as they have been losing competition in the global market against rival Japan, whose products now have the upper hands thanks to its weak currency against the U.S. greenback.

Exports to Europe saw the biggest on-year increase of 6.6 percent, followed by China’s 3.7 percent. Exports to the U.S., which saw a significant increase in October, slowed a bit, expanding 2.8 percent.

Yet the central bank was confident that the current situation is only temporary.

The central bank will be announcing its economic outlook for 2014 early next month.