No end to strengthening of won against the yen

No end to strengthening of won against the yen 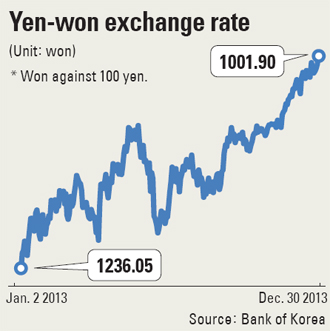 The rate at which the Japanese yen is falling has been fast enough to keep currency traders and exporters at the edge of their seats.

Although the Korean won weakened at the last minute, it appreciated sharply to trade at 999 won immediately after the currency market opened earlier yesterday.

This was the most the won had appreciated against the Japanese currency in five years.

The last time the won was trading at 999 won against 100 yen was in early September 2008, right before the global financial crisis following the bankruptcy of Lehman Brothers.

Since then, the Korean currency has been trading between 1,200 won and 1,600 won against 100 yen. Even at the beginning of the year the won was over 1,500 won against the Japanese currency.

Yesterday’s sharp appreciation of the won against the yen is a continuance of the fall of the yen against global currencies on the back of an aggressive stimulus program known as “Abenomics,” which is named after Japanese Prime Minister Shinzo Abe.

On Friday, the yen depreciated to 105 yen against the U.S. greenback for the first time in five years.

Furthermore, the yen has gone from 100 yen to 105 yen against the dollar in just half a year. The Federal Reserve’s decision earlier this month to start the tapering off of its stimulus program is strengthening the value of the dollar, while the Japanese government’s goal of maintaining its program of continuously flooding the market with liquidity continues to weaken the value of the country’s currency.

Some market analysts say the most recent depreciation of the yen will not likely have an immediate effect since its been falling for more than a year, and many of the large Korean conglomerates have already adopted several strategies to cushion the blow from the volatile currency situation, such as diversifying payments made on its exports while increasing production in overseas plants.

But not all companies are lucky enough to be in that position; especially industries that are competing against Japan, such as automobile and steel, are likely to be severely affected by the recent currency moves.

“The rate at which the Korean won is appreciating compared to the Japanese yen is alarming,” said So Jae-yong, an economist at Hana Daetoo Securities.

The economist said that when the Korean won appreciates 10 percent against the Japanese yen, Korea’s exports fall roughly 4 percent. Compared to a year ago, the won has, in fact, appreciated roughly 20 percent.

“It is about time for the government to adjust the rate at which the Korean won is strengthening in order to prevent exports from losing their competitiveness,” the economist said.

The Japanese yen’s depreciation is unlikely to end soon as the U.S. economy is expected to continue its recovery throughout next year. Deutsche Bank projected next year’s yen-dollar exchange rate to be between 110 and 115.