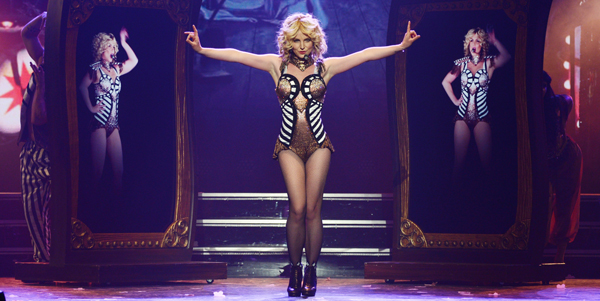 LAS VEGAS - Britney Spears has begun her early retirement in Las Vegas with a show that looks strikingly like the eye-popping Cirque du Soleil productions found elsewhere on the Strip.

The debut of Spears’ long-term casino gig Friday kept an audience of about 4,500 on their feet for about 90 minutes. The young-for-Vegas crowd was there for the danceable hits and the spectacle, which included acrobatics, a ring of fire, confetti, a live band, frenetic costume changes and a frequently airborne Spears.

The show’s production values are unusually high for a casino residency, often calling to mind the golden age of music videos. Its high-concept set pieces featured a cadre of backup dancers who danced in human-sized hamster wheels and somersaulted over the Grammy-winning star.

She cuts a different figure from the typical Strip headliner. Other successful Las Vegas acts - including Shania Twain, Elton John and Celine Dion - have generally attracted an older audience. Judging from Friday’s show, her fans are more likely to be found at a casino mega-club than in front of a slot machine.

Still, her show “Piece of Me,” is not immune to nostalgia, one of the prime currencies in Las Vegas entertainment. It includes several callbacks to the 1990s and early 2000s, including plaid shirts tied around dancers’ waists and a recap of the barely-there sparkling costume Spears wore in the “Toxic” music video.

Spears’s younger self haunted the show, with clips of her early performances playing on huge monitors. Notably absent from those monitors, to the displeasure of some fans in the cheap seats, were any live close-ups of what was unfolding onstage.

On his way out, Shane Sodeman, of San Diego, complained that Spears hadn’t donned the sexy school girl outfit or the skintight orange jumpsuit she wore in sexier days. A version of the jumpsuit was displayed in the lobby.

Speculation abounded ahead of the show that Spears would not be singing live, a claim that officials with Planet Hollywood parent company Caesars Entertainment denied.

Entertainment Programming Vice President Kurt Melien said Spears sings against a recorded track of her vocals to help her through the more physically grueling parts of the set, and add the electronic undertones that characterize many of her songs.

On Friday, all but a few performances seemed to require intense athleticism. Some audience members said it would be unfair to require Spears to perform a high-intensity workout on stage and also hit every note. Given a choice between the two, they said they’d take the choreography.

“I loved it,” said Maryn Harberg, 29. “She was totally lip-syncing, but that’s what she does, she puts on a show.”