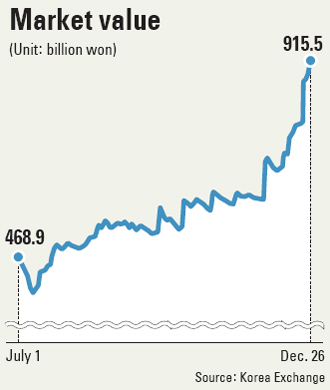 The Korea New Exchange market, the country’s third stock bourse that opened in July under the administration of President Park Geun-hye, has experienced lukewarm success since its introduction six months ago, according to figures so far.

The exchange market, known as Konex, was intended to boost the creative economy by allowing tech-focused small- and midsize companies (SMEs) as well as start-ups to raise capital through stocks. One of its primary aims was to provide SMEs and start-ups - companies too small to be listed on the minor Kosdaq market and are highly dependent on bank loans to raise capital - to also be able to secure funds in the capital market.

Compared to the secondary market, to allow as many companies to be part of the new market, the government lowered the barriers in which companies could list their stocks on the market. Any company with either 500 million won ($473,500) worth of equity capital, 1 billion won in sales or 300 million won of net profit is eligible to be listed on the Konex.

“It allows the finance sector to be able to contribute in boosting the creative economy,” Shin Je-yoon, chairman of the Financial Services Commission, said in July.

Over the last six months, however, market response has been tepid. While the number of Konex-listed companies and their total market prices have nearly doubled since its inception, total trading volume has gone down.

Externally, the Konex market has expanded. When it opened last summer, 21 companies were listed, but that number has more than doubled since then to 45. The total market price also jumped from 468.9 billion won on its first day to 865.5 billion won as of last Thursday.

“When we opened the bourse, we had a goal to have 50 listed companies this year, and we almost reached that goal,” said Jung Woon-soo, an official from Korea Exchange. “The [Konex] market is picking up slowly.”

However, concerns still remain over total trading volume. Listed companies are only able to secure capital if they issue new stocks when prices reach a fair level and there’s enough liquidity in the market. But so far, trading volume has been low.

On opening day in July, total trading volume was 219,700 shares. Since then, that figure has risen only once on Dec. 13. Last month, for example, average monthly trading value was 252 million won - 42 percent less than the first month after the market opened.

So despite the growth in the market’s listed companies, trading has been relatively uneventful.

Some companies’ stock prices have gone up, such as Websolus, a water resource management business. On July 1, the company’s stock price was 1,800 won, but as of Thursday its price had gone up to 3,990 won - a gain of 120 percent. Stock prices of companies like VinaTech and Hironic have also jumped more than 60 percent.

However, there were more companies in which stock prices have plummeted - like Sewha P&C, a hair-care brand whose stock prices dropped more than 57 percent over the same period.

Experts believe it is unlikely that the Konex will gain momentum in the near future. They argue that there are few items that investors are able to pour their money into, and that overall policy restricts them from investing in start-ups.

The government’s policy, for example, states that small investors can invest in small promising companies only if they make a deposit of more than 300 million won.

“In order for the government to activate the Konex market, they should first ease the barrier so that retail investors are also able to invest,” said Kim Chang-ho, head of the Konex Association.

Yet the government has remained firm on this strategy over concerns that there are relatively higher risks for individuals who invest in small companies compared to large-cap shares.

Meanwhile, 11 securities firms designated as investment advisers have been criticized for not fully fulfilling their obligations. When it first introduced the Konex market, the government designated brokerages that would offer in-depth analyses on its listed companies to investors.

However, seven of those 11 securities firms haven’t even released a single report on a listed company.