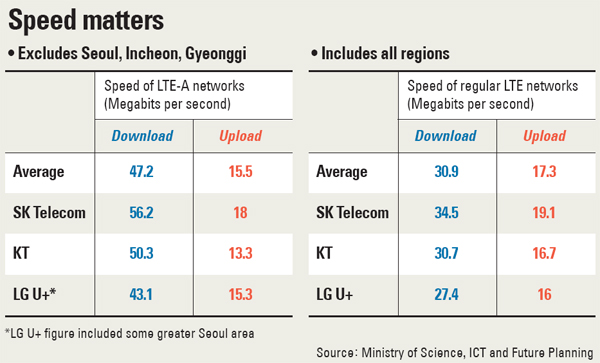 LG U+ ranked at the bottom in terms of the speed of its LTE-A service, according to the Ministry of Science, ICT and Future Planning yesterday.

The ministry announced the results of its assessment of the quality of local telecommunications services this year. It was the first year it made assessments for the new long-term evolution (LTE) services.

There are three kinds of LTE services available. Regular LTE is a fourth-generation telecommunication service that offers data flow as fast as 75 megabits per second. LTE-A doubles the speed up to 150 megabits per second by connecting two separate LTE bandwidths. Broadband LTE does the same by widening the bandwidth.

LG U+, the nation’s smallest mobile carrier, was assessed by the ministry to be providing LTE-A service at 43.1 megabits per second for downloading data, slower than the average 47.2. Market leader SK Telecom was fastest at 56.2 megabits per second and KT came in at 50.3 megabits.

LG U+ was the only provider that offers LTE-A in parts of greater Seoul and Gyeonggi, and it is still preparing to launch broadband LTE. SK Telecom and KT opted not to set up LTE-A in Seoul and the surrounding metropolitan area because they already offer broadband LTE. SK and KT do offer LTE-A in other parts of the country as an alternative to broadband LTE.

LG U+ issued a statement that the ministry’s assessment was “unfair and meaningless at this point in time” because the company’s statistic included some parts of Seoul, Incheon and Gyeonggi areas, where more subscribers with LTE-A services are based and therefore data traffic is typically heavier than in smaller cities in provinces.

LG U+ claimed SK Telecom diverted some data traffic to its newly obtained bandwidth, which speeded up its existing LTE-A service.

The company also contended that KT was in an advantageous position since KT only provides the service in light-traffic regional cities, boosting its average speed.

“Back in August, the government allocated the bandwidths near 1.8 Gigahertz to SK Telecom and KT, which were located right besides their existing networks. They could easily speed up existing services and launch broadband LTE by building little extra networks,” the statement read.

The statement also contended that the assessment was unfair for not considering the fact that LG U+ lacked funding to make investments in bandwidth near 2.1 Gigahertz due to heavy spending on a new network for the broadband LTE network.

An official at the ministry said that it is correct that the rank was based on all LTE-A service areas, which included greater Seoul area and Gyeonggi in LG’s case.

“Even when we compared excluding the traffic-heavy Seoul and Gyeonggi area, LG’s LTE-A still lagged behind,” the official said.

KT argued that it has offered bullet-fast broadband LTE to regular LTE subscribers in the greater Seoul, Incheon and Gyeonggi regions, and the company will do the same for subscribers in other metropolitan cities.

Meanwhile, in terms of regular LTE, SK Telecom was the only provider that offered faster service than the average 30.9 megabits per second. It recorded 34.5 megabits, while KT had 30.7 and LG U+ 27.4.

LG U+ also announced that the company partially launched broadband LTE service as of yesterday in highly populated areas in Seoul and Gyeonggi: Jongno, Jung, Gangnam, Seocho and Eunpyeong districts in Seoul, and Suwon and Anyang in Gyeonggi. The company said it would cover most areas of greater Seoul by February and all metropolitan cities starting in March.