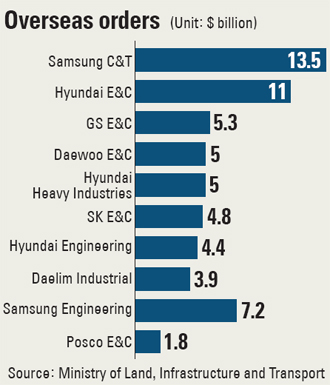 Korean construction companies won $65.2 billion worth of overseas orders this year, the second largest after 2010, said the Ministry of Land, Infrastructure and Transport yesterday.

Although that was short of a government goal of $70 billion, it shows that the overseas construction market is recovering.

“The country’s annual order volume is showing stabilization in the range between $60 billion and $70 billion, which is positive,” the Land Ministry said.

Asian countries accounted for 42 percent of the orders, the largest market for Korean companies.

Orders from Asia surpassed $20 billion for the first time owing to companies’ efforts to diversify their markets, up 42 percent from a year earlier. Asia has now surpassed the Middle East, which was the top market for Korean companies since 2001.

Samsung C&T grabbed a $5.8 billion order from Australian-based Roy Hill Holdings to build an iron ore processing plant, a 340-kilometer (211-mile) railway line and port facilities. This was the largest deal of the year.

About 61 percent of the orders were plant constructions, the report showed. Civil engineering orders claimed about 28 percent.

The Middle East region is predicted to be a lucrative market as some large petrochemical plant orders that were held up are likely to be placed.

The companies expect more than $26 billion in orders from Kuwait alone.

The International Contractors Association of Korea (ICAK) projects the total order volume could reach $72 billion next year. The association has already confirmed more than $30 billion in orders.