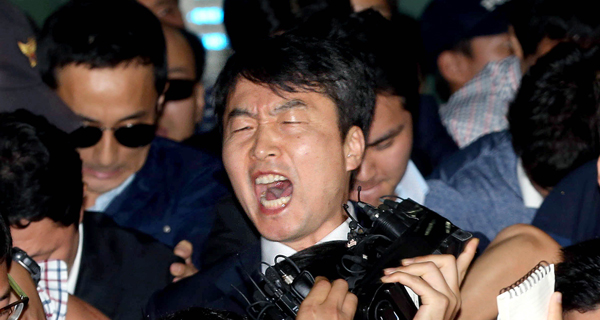 Representative Lee Seok-ki, a lawmaker of the minor opposition Unified Progressive Party, and other senior party members rocked the political sphere this year with their involvement in Korea’s first anti-state case in 30 years.

UPP lawmakers were indicted in September for conspiring to overthrow the government. The party’s reputation was tarnished so badly over allegations of links to North Korea that the administration of President Park Geun-hye took an unprecedented step in early November by asking the Constitutional Court to dissolve it.

The prosecution claimed that Lee attended a meeting of the Revolutionary Organization (RO), a pro-Pyongyang underground group, where he and other members plotted a rebellion against the government in a building in Mapo District, western Seoul, on May 12.

A transcript released by prosecutors quoted Lee as saying that he was determined to assist North Korea in the event of war by destroying oil storage facilities, communication centers and police stations. The men were accused of violating the National Security Law, inciting and plotting a rebellion and praising Pyongyang’s regime, as well as possessing illegal documents and materials.

Lee was consequently stripped of his parliamentary immunity but continued to deny all allegations against him. However, in a hearing in late November, the troubled lawmaker was pinpointed as the leader of the pro-North faction by a key witness who confessed to being a former member of the RO.