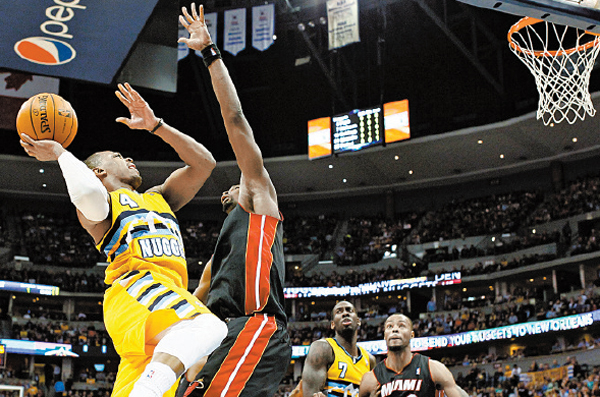 LeBron James returned from a groin injury to score 26 points on his birthday, and the Miami Heat beat the skidding Denver Nuggets, 97-94, Monday night, despite losing Dwyane Wade and Norris Cole during the game.

James, who turned 29 on Monday, injured his groin Friday during the Heat’s overtime loss at Sacramento. He sat out the following game, a 108-107 win Saturday in Portland, before coming back to help send the Nuggets to their seventh consecutive loss.

Ty Lawson had 26 points to lead the Nuggets, who lost their second straight to Miami at the Pepsi Center after winning the previous 10 in a row.

While the Heat got James back, they were without Wade and Cole for much of the game.

Cole left midway through the third quarter after taking a fall at the end of a driving layup attempt and hitting his face on the floor.

He had come into the game in place of Wade, who didn’t return after halftime because of back spasms, the Heat said on Twitter.

Cole went up for a shot against Lawson, who was called for a foul, and fell face-first to the floor. Cole remained down for several minutes while being tended to by trainers before being helped to his feet and assisted off the floor to the locker room for treatment.

Trailing by nine at the break, the Heat opened the third quarter with a 13-0 run, regaining the lead on a 3-pointer by James. Denver fought back to take a 77-22 lead into the fourth quarter, getting successive baskets from Randy Foye and a dunk from Timofey Mozgov to help offset another 3-pointer by James.

After Lawson hit a 3 to put Denver up, 90-89, James and Allen converted jumpers on consecutive possessions for a 93-90 Miami lead with 1:36 remaining.

Wilson Chandler’s two-handed dunk got Denver within a point with 50.7 seconds left, but Miami answered with a 3-pointer by Michael Beasley off a feed from James.

Allen was fouled with 15.4 seconds left and made one of two free throws.

Lawson’s off-balance 3-point try hit off the rim and the rebound went out of bounds off Miami, giving Denver one last chance with 1.8 seconds left. With Udonis Haslem in his face, though, J.J. Hickson didn’t get the inbounds pass off within 5 seconds, turning the ball back over to Miami, which ran out the final moments.