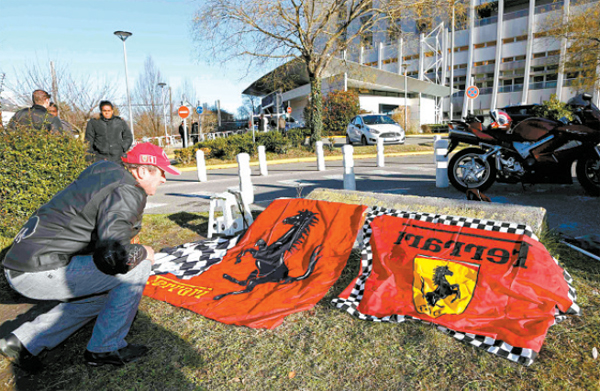 Support has been pouring in for Michael Schumacher after the retired seven-time Formula One world champion suffered severe head injuries in a skiing accident at the French Alps resort of Meribel on Sunday.

A spokesman for German chancellor Angela Merkel told a briefing: “We hope that he overcomes his injuries and can recover.”

F1 world champion Sebastian Vettel: “I am shocked and I hope that he will get better as quickly as possible. I now wish his family a lot of strength.”

Schumacher’s former Ferrari team: “Everyone at Ferrari has been in a state of anxiety since hearing about Michael Schumacher’s accident.”

Mercedes-Benz Motorsport and F1 team: “We have been shocked to learn that he is in critical condition and are closely monitoring the latest medical bulletins from Grenoble. We all know the depth of Michael’s fighting spirit and send him all our strength and support in this latest battle.”

NBA star and compatriot Dirk Nowitzki on Twitter: “My thoughts are with Schumi.”

Former Benetton teammate Martin Brundle told Sky TV: “When I read that Michael had received a blow to the right side of his head, I couldn’t help but think of Ayrton [Senna], [late Brazilian racer] and pondered why these things so often happen to the truly great. I sincerely hope and expect of course that this incident has a much happier ending, and I feel sure that his competitive determination and fitness will give him the best chance.”

Former F1 driver David Coulthard told the BBC: “As I know Michael from the racetrack, there is no question in my mind that he has the physical ability to take on this challenge, the greatest challenge of his life.”

Quadruple Indy Car champion Dario Franchitti on Twitter: “My thoughts are with Michael Schumacher and his family. If anyone can pull through this, it’s him.”

Former Alpine skiing world champion Luc Alphand: “I’m stunned. Skiing, for me and a lot of people, is a leisure before anything else. He might have hit a rock with his feet and you don’t need to go fast to hurt yourself.”