With season over, NFL coaching carousel fires up

With season over, NFL coaching carousel fires up 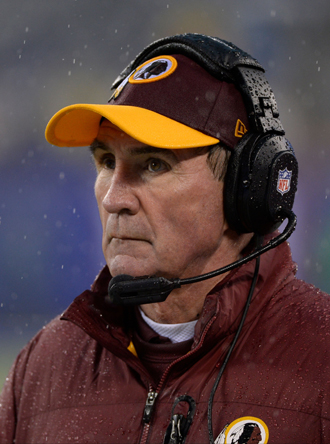 The Cleveland Browns didn’t even wait that long, dismissing Rob Chudzinski on Sunday night after just one season on the job.

Shanahan, who won two Super Bowls in Denver in the 1990s, spent four seasons with the Redskins and was 24-40. Frazier had a little more than three seasons with the Vikings to compile an 18-33-1 mark, and Schwartz coached the Lions for five seasons, finishing 29-52.

Schiano only got two years with the Buccaneers, going 11-21. He had three years and $9 million left on his contract. Tampa Bay also fired general manager Mark Dominik.

“It’s tough for the players to see your coaches go. You never want to see anybody get fired,” Pro Bowl defensive tackle Gerald McCoy said. “Me personally, I haven’t had any consistency in my career. Third head coach, going on my fifth year and three head coaches. Add up everybody, it’ll be six D-line coaches.”

The Buccaneers, who also have fired the likes of Tony Dungy and Jon Gruden, hired Schiano out of Rutgers in 2012 and went 6-4 before losing five of their last six games. They dropped their first eight games this season and finished 4-12.

One coach allegedly on the hot seat was retained: Rex Ryan, who has one more year on his contract, is staying with the New York Jets after a surprising 8-8 record in his fifth season.

While some of the fired coaches might have seen it coming, Chudzinski certainly didn’t, despite going 4-12 and losing his final seven games and 10 of 11.

“I was shocked and disappointed to hear the news that I was fired,” said Chudzinski, who grew up a Browns fan. “I am a Cleveland Brown to the core and always will be. It was an honor to lead our players and coaches, and I appreciate their dedication and sacrifice. I was more excited than ever for this team, as I know we were building a great foundation for future success.”

As the coaching searches begin, agents will float the names of their clients - Penn State’s Bill O’Brien seems to be the hottest candidate and has interviewed for Houston’s vacancy. The Texans (2-14), who own the top choice in May’s draft after losing their final 14 games, released coach Gary Kubiak late in the season.

Whoever gets hired in each place will face mammoth rebuilding projects. Overall, the six teams seeking new coaches went 24-71-1.

Shanahan had one season remaining on a five-year contract worth $7 million a season. He blamed salary cap restraints for part of the Redskins’ collapse from NFC East champion in 2012 to 3-13 and eight consecutive losses.

Washington was hit with a $36 million salary cap penalty over two seasons for dumping salaries into the 2010 uncapped season, and Shanahan said it prevented the team from pursuing free agents it had targeted.

But his real undoing, along with the poor records in three of his four seasons, was a contentious relationship with star quarterback Robert Griffin III.