New head of Copion urges spirit of volunteerism for all

New head of Copion urges spirit of volunteerism for all 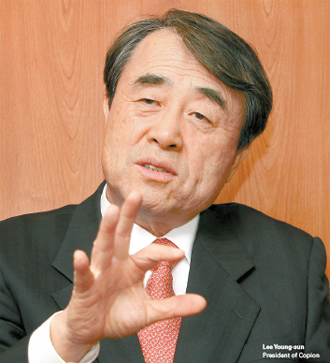 Education and teaching the skills people need to support themselves is an important goal in overseas volunteer projects, said the new president of the nonprofit humanitarian organization Copion, Lee Young-sun.

“For now, our education projects are just basic, to help escape poverty, to instill the notion that young children need to have an education,” Lee said, sitting down with the Korea JoongAng Daily for an interview on Dec. 17 at Copion headquarters in Yongsan District, central Seoul. “We also think job training is very important, so people can find jobs and improve their lives.”

The former president of Hallym University was selected as the head of Copion on Dec. 4. “As president of Hallym University, I was active in volunteer activities with students,” he said, “like giving out coal briquettes with the students [to the poor and elderly to heat their homes].” He said he has been involved in volunteer activities since his high school days.

Copion, short for “Cooperation and Participation In Overseas NGOs,” was founded as a volunteer promotion campaign by the JoongAng Ilbo in 1999. Since then it has grown into a nonprofit humanitarian organization under the auspices of the Ministry of Foreign Affairs of Korea.

The organization aims to contribute to the development of global civil society and dispatches more than 1,500 Korean volunteers overseas annually, for projects that can last from months to years. Its volunteers have been sent to more than 40 countries, including Cambodia, Ethiopia, Indonesia, Mongolia and Nepal, working with more than 150 nonprofit and nongovernmental organizations.

Lee, an economist, has made the rare accomplishment of serving in leading roles in academia, the corporate arena and in humanitarian fields. He also served as chairman of Posco’s board of directors and an independent non-executive director. Balancing these different roles is not strange, Lee said. “They are all interrelated.”

To Lee, the crux of humanitarianism is that it is not enough simply to help another person. Education is most important.

Copion opened a branch in Kathmandu, Nepal, in 2006, where it concentrates on projects helping public schools and building libraries. It also offers women programs in building skills, child care, computer training and more.

When you walk into Copion headquarters, there is a long bulletin board with a sign that reads “What do you think? What do we think?” It is covered with small, colorful notes from elementary school students.

Copion not only helps educate those in developing nations, but it also has programs where its workers go into schools here to teach students about volunteering and the need to help others.

One fourth-grade girl from an Incheon elementary school named Cho Ha-yeon wrote: “Friends living in Korea, do you know how many female students are suffering around the world? Now it is our turn to help them. We can save our money to send school supplies and join together to help!”

Q. Can you share your impressions upon becoming the fifth president of Copion?

A. I am called the president, but I think that is a misleading title; rather I am leading a volunteer organization, helping others and providing direction. If you say “Copion,” people usually don’t know what we do. But to summarize, we do global development projects. To put it simply, we dispatch young people, university students and others overseas for short-term and long-term volunteer projects. For developing nations, we provide education development services, to help to poor improve their condition and develop society. As an NGO, we work with Koica [the Korea International Cooperation Agency] and work with other NGOs.

I’ve been a professor for 30 years and, as an economics professor, I think a big reason Korea was to advance was the development of its human resources, which was possible through education. The question at hand is how to develop the human resources in developing nations, and that is the task for NGOs such as us to work at to achieve good results. We not only give aid to the people of these developing nations but provide a good opportunity for our young people to be able to go there, see a different society and learn to think about and help others.

What are your short-term and long-term goals for this organization?

Korea has developed to a certain extent since the end of the 1990s and is in the position to help developing nations. There are many volunteer groups, but they are in ways very similar. But we decided our vision for truly helping people means helping them stand up for themselves. That is why we are not just a simple volunteer organization but a group focused on education. We aim to build libraries, establish schools, provide after-school classes and invigorate people. We also provide skills training, like in beauty and cosmetics, IT and other projects. If you hear the name Copion, we want to be thought of as an education-focused international cooperation organization. We already have many branches in countries like Nepal, Cambodia, Indonesia and Ethiopia, and in the long-term we want to continue to send even more volunteer groups to carry out this objective.

What are some of the challenges in carrying out such goals and how do you plan to overcome them?

Of course the biggest obstacle is budget. Luckily, the government has begun providing funding through Koica. Furthermore, university students have recently begun using their own money to be active in volunteering. However, they have no networks abroad and don’t know how or where to go, so we help those students network and help train them.

In addition, many companies also dispatch their employees as volunteers. For Korean companies, it’s important because when they set up businesses in developing nations, it’s not a good image if they go there simply to earn money. That’s why these companies, when they go overseas, often get involved in volunteer activities. We can help organize them and link them to local NGOs, like we did with SK Telecom in Indonesia.

Can you elaborate on your junior and senior programs?

Junior programs target university students. Senior programs are for those who have retired but still hold a lot of knowledge and skills and are still able to be active, go overseas for long-term projects and volunteer there. University students can do any sort of volunteer work; they can teach children or create cultural exchanges. Seniors can teach skills, such as hairstyling and cosmetics or IT technology or teach students.

Do you have any memorable episodes you can share after talking with Copion volunteers?

Our young people are really self-sacrificing and have a great sense of volunteerism. Some, right after graduating college, single-mindedly go to Africa and volunteer for several years, and even though they get malaria multiple times or catch dengue fever, they overcome that and continue their volunteer activities. These aren’t missionaries, but those who are volunteering without a religious message, for the sake of volunteering for others.

How can people build a healthy volunteer mentality?

It’s important for students to participate in volunteer activities, as it will change their perspective on life. Even if it’s not related to their field or job, it helps in character building and their views will open toward the rest of the world. It builds resolution in their lives. Those who are able to can also donate. We have a program where you can donate 10,000 won ($9.50) a month. When many people all donate 10,000 won, we can carry out even greater projects. We already have 10,000 people who have gone through Copion volunteer activities to date. And we have 1,000 people subscribed to the 10,000 won per month donation campaign.

What countries do you think Copion especially has to pay attention to?

Ethiopia is a country that contributed troops to help us during the [1950-53] Korean War. Many soldiers from their country came to Korea to aid us, but they are now in a difficult situation, so we need to put a lot of consideration into Ethiopia. The Philippines as well, we have a branch office there.

In additional to overseas humanitarian aid, you have also been active in promoting unification and aid to North Korea as head of the private charity group 1090 Peace and Unification Campaign, which was launched last year. How did this come about?

As an economics professor, I have written papers and done research on North Korea economics and the economic issues following unification and also served as head of Yonsei University’s Korea Institute for National Unification. The idea is, those from ages 10 to 90 can contribute to the unification of and peace in the Korean Peninsula. It is a movement to propel not a forced unification, but a peaceful and cooperative unification. Thus, various leaders of our society and a very diverse group have gathered for this movement for a year now. We are active in a lot of activities, such as planning educational programs, discussions on humanitarian aid to North Korea and other projects to promote exchange.