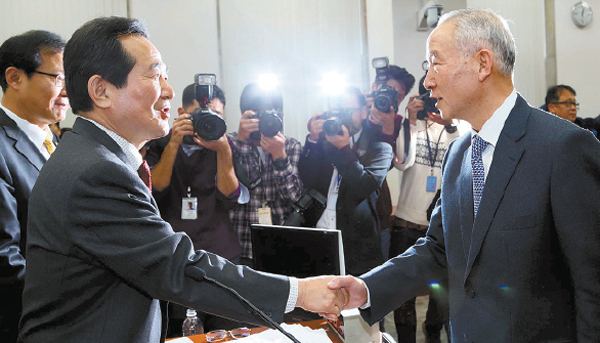 After nearly a monthlong tug-of-war between ruling and opposition party lawmakers, the two sides reached a dramatic compromise yesterday on measures to prevent the National Intelligence Service (NIS), the nation’s top spy agency, from meddling in politics.

But the passage of the amendments to the NIS Act - as well as a package of other bills, including next year’s budget - were held hostage in the evening due to a disagreement over a bill loosening the restriction on foreign investment.

Earlier in the day, assistant secretaries from the Saenuri and Democratic parties consented to seven bills related to measures that would overhaul Korea’s top spy agency.

The compromise came 29 days after the leaders from both sides agreed to establish a special parliamentary committee for NIS reform.

The NIS will now be required to draw up its internal regulations and report to the committee by the end of January.

Notably, lawmakers decided upon a clause that specifically bans NIS agents from interfering in political activities through the use of information communication networks, a practice widely referred to as “cyberspace psychological warfare,” which mostly mobilizes social networking services (SNS) and web forums.

Those who violate the clause will be subject to up to a seven-year prison term or disqualification, a step up from the current five years.

Political interference remained a hot-button issue last year that divided the nation’s liberals and conservatives after the top spy agency was accused of waging an online smear campaign against Democratic candidate Moon Jae-in ahead of the 2012 presidential election.

Democrats demanded the agency undergo reforms to prevent similar instances in the future.

Other reform measures called for banning NIS intelligence officers from routinely visiting government institutions, political parties and media outlets to collect information unless it is for a legitimate purpose.

While attending the special committee meeting yesterday morning, Nam Jae-joon, the chief of the NIS, said he respected and “will humbly accept the Assembly’s decision.”

However, he added that he was “puzzled by the legal restrictions on intelligence activities.”

When Democratic lawmaker Moon Byung-ho earlier asked Nam if he no longer intended to “order agents to publicize government policies in order to influence public opinions,” Nam countered, saying that he was not doing it now, nor did he intend to do it in the future.

Saenuri lawmakers sided with Nam’s stance, claiming the measures have practically “tied the hands and feet of NIS agents.”

Meanwhile, the Democratic Party welcomed the reform measures. Earlier in the day, the lawmakers passed 77 bills en masse at the plenary session - an extra plenary session after the last official one for 2013 wrapped up on Monday.