In nationalist act, Abe to visit islands in Pacific

In nationalist act, Abe to visit islands in Pacific 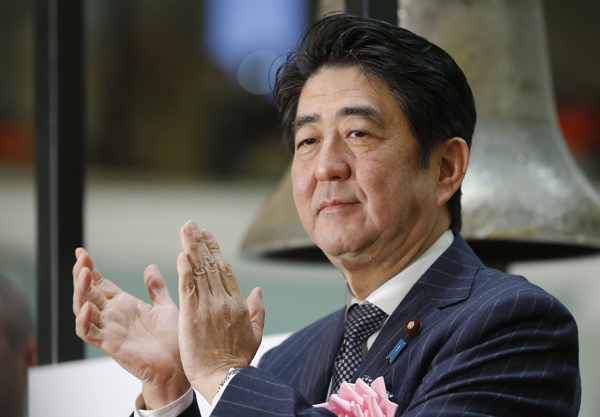 The Japanese local newspaper Sankei Shimbun reported yesterday that for the next two years starting in 2014, Abe will make visits to far-reaching southern islands - including Guam, Papua New Guinea and the Solomon Islands - where about 500,000 Japanese soldiers fought for Imperial Japan against the Allied forces during the war.

Linking the trip to Abe’s recent visit to the Yasukuni Shrine, where more than a dozen Class-A war criminals are honored, the conservative newspaper called the trip to the former battle fields “a trip to console the souls” of the soldiers.

“Prime Minister Abe, for the first time since his inauguration, paid his respects to the war dead at the Yasukuni Shrine on Dec. 26,” the Japanese-language newspaper said. “Starting next year, he will separately visit the islands in the Pacific Ocean where [other] fallen soldiers are sleeping.

“[The trip] reflected Abe’s strong will to strengthen the activities for honoring the war dead and collecting their remains,” the paper added.

Abe plans to offer official development assistance to the countries he will visit, the Sankei said. It added that he is also considering attending the Pacific Islands Forum held in Palau in September.

Tokyo has generally considered the forum as a vice ministerial-level meeting, but Abe wants to promote Japan’s growing influence in the region through his attendance, the Sankei said.

Recent nationalist acts by Abe have become a source of tension for neighboring China and Korea, whose soldiers were forcibly conscripted by Imperial Japan. Some analysts speculate the moves could be part of an attempt to draw support among Japanese voters, particularly the right-wing demographic, with his approval rating below 50 percent.

The South Korean National Assembly yesterday adopted a resolution denouncing Abe’s visit to the contentious war shrine, with all of 211 seated lawmakers calling the visit “an act glorifying its invasions with no regret for its wartime aggression.”

“I do not wish to comment on questions related to Japanese domestic politics,” Steffen Seibert, spokesman for German Chancellor Angela Merkel, told reporters in Berlin when asked about Abe’s visit to the Yasukuni Shrine, which enraged China and South Korea. “But in general, all nations must honestly live up to their role in the horrible events of the 20th century.

“Only on the basis of this honest accounting is it possible to build a future with former foes,” he said. “This is a conviction Germany takes to heart and which, in my opinion, applies to all states.”