The entertainment hall in the Gangnam Tourist Information Center features a large-screen TV that shows K-pop performances and an exhibit on celebrity fashion. But only a handful of tourists visit the zone. By Park Sang-moon

The affluent neighborhood is the subject of the song, and some of the scenes in the music video were filmed there. It was the most-watched clip on YouTube, receiving more than 1 billion views.

For Korean government officials, the 35-year-old rapper’s phenomenal success served as an impetus for expanding K-pop’s fan base and improving its overall “soft power,” something they had long sought to achieve.

To this end, the Gangnam District Office formed a specialized tourism division in October 2012 with the aim of doubling the number of tourists there.

This ambition was perhaps most clearly reflected in the newly built two-story Gangnam Tourist Information Center, which was intended to be a hub for visitors to the upscale neighborhood.

Boosted by the popularity of Psy’s music, the Seoul city government put 1.5 billion won ($1.42 million) toward the construction of the venue, the site of which is near a boutique-lined street in Gangnam’s Apgujeong-dong.

The complex contains general tourist information and medical tourism booths on the first floor and an entertainment hall on the second. The second floor - equipped with the latest virtual technology and handset devices featuring K-pop music videos - was expected to be the centerpiece of the tourist facility and to serve as an emotional connection with tourists.

Unfortunately, the complex has been met with little success.

Since it opened its doors in June, the facility has been cursed by a number of issues, including a lack of tourists, poor promotional scope and funding concerns.

A major reason for the center’s disappointing reception appears to stem from an entrenched bureaucratic way of thinking, with officials offering tourists what they think foreigners should see, rather than responding to the interests of their visitors.

The main exhibition in the entertainment hall features a digital display that puts visitors alongside virtual images of Korean pop stars. A handful of celebrities’ stage costumes and clothing items are also laid out, although you can neither touch nor purchase them. 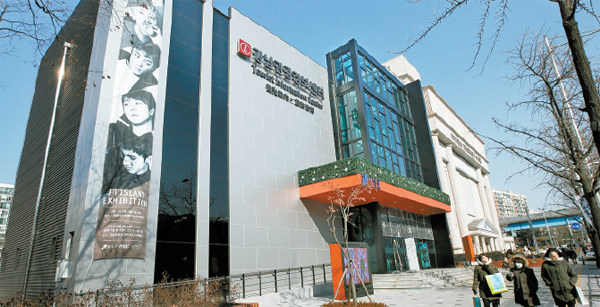 Other offerings include K-pop music video presentations, including those from Sistar, Beast and Exo.

On Friday afternoon, there were less than 20 tourists on the complex’s second floor from 11 a.m. to 4 p.m. - apparently a peak time for them. The sprawling 396-square-meter (4,262-square-foot) center was largely empty and quiet throughout the day.

The number of foreign visitors averages between 30 and 50 per day, said an on-site guide, who requested anonymity.

Some of the visitors that day complained that the facility’s scope was limited, especially in regard to K-pop. Yannick Thierry, a Dutch tourist who visited the center on a two-week holiday to Korea, said she had hoped for more interactive displays.

“When I entered, I expected more active and exciting [exhibits] - such as learning K-pop dances,” she said.

Another visitor from Germany pointed out that she couldn’t find any of the information she was seeking at the center. “[I wanted to know] how I could reserve a seat at K-pop concerts in Korea,” said Nelli Bohm, 26, an exchange student.

“We can watch music videos at home, but [I wanted to find out how I could] register for concert tickets and other performances,” she continued. “Many of the ticketing websites don’t usually offer foreign language services, and even if there is, I want to get tips about how to get a seat for the concerts that sell out quickly.”

Some visitors also expressed dissatisfaction with the range of celebrities featured.

“I feel [the center] focuses only on a selected group of celebrities,” said Tracy Chen, a tourist from China. “I hoped there would be something related to actor Kim Su-hyun because I couldn’t find anything about him. He is really big in China now.”

Compounding the matter is the fact that Gangnam Tourist Information Center currently operates on Seoul taxpayers’ money, even though it doesn’t generate any profit. The city government allocated 600 million won for the center’s operation next year, but the dismal number of tourists has cast doubt over the future of the tourist complex.

Despite the proclaimed goal of turning the center into a Gangnam tourist hub, the venue still lacks an official website, and most of the visitors on Friday just happened upon it.

“I think this center should have more advertising and promotion,” said Edgar Caballero, from Mexico.

“We didn’t know such a center exists. People these days search for tourism information through the Internet or tour-related applications,” he said, adding that the center was not registered on any Seoul tourism apps that he had downloaded.

The venue, which is overseen by the district office and operated by the Seoul Tourism Organization, a private unit under the Seoul Metropolitan Government, said that it is in the process of making one.

The medical tourism desk, on the first floor, has also had its share of challenges. The desk is designed to provide orientations, consultations and information on Gangnam’s medical sector, and four medical coordinators from Gangnam’s plastic surgery and dermatology clinics are expected to be on site during operating hours.

However, on Friday, there was only one gynecology specialist available, and the booths for cosmetic surgery and dermatology didn’t even have a coordinator.

The center attributed their absence to the peak season at clinics, and the complex’s president insisted that services would be improved.

“We are just in the beginning stages of business,” said Lee Soo-na of the Seoul Tourism Organization, who is at the helm of the Gangnam center. “The number of visitors doesn’t meet the target that we set now, but with different programs and cooperation from entertainment companies, we will extend the programs.”