Tensions remain after end of strike

Tensions remain after end of strike 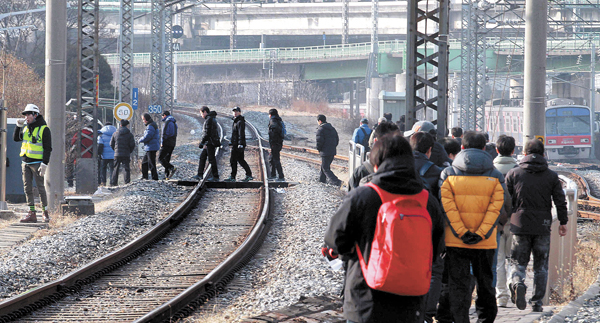 Members of Korail’s labor union walk back to work yesterday morning. The union ended the 22-day strike on Monday in exchange for the formation of a subcommittee in the National Assembly to deal with pressing issues in the railway service industry. By Kim Hyung-soo

A new parliamentary subcommittee tasked with resolving long-term issues in the railway industry seems to have become a new battleground for the parties involved following the end of a prolonged strike by the labor union of the Korea Railway Corporation, or Korail.

The walkout was spurred by Korail’s controversial decision to introduce a separate operator in charge of running a new bullet train service linking Busan and Suseo-dong in southern Seoul. The panel is the result of an agreement made earlier this week, which put an end to the longest strike in railway history.

Despite the breakthrough, political wrangling was incessant yesterday, signaling a rocky path ahead.

Committee members ultimately failed to agree upon how to bridge current divides.

Opposition representatives suggested that the subcommittee come up with legislative measures aimed at banning the privatization of the state-run railway operator, arguing that those fears had triggered the strike in the first place. However, the ruling Saenuri Party countered, asserting once again that the government had no intention of privatizing Korail and that such a move would conflict with clauses in the Free Trade Agreement.

Choi, who vowed to push ahead with the plan to punish 490 workers involved in the strike, expressed regret over the union’s plan to keep its fight in the workplace.

“It’s very regrettable and worrisome that the union will continue its protest,” Choi said, reiterating that Korail will file a lawsuit for the estimated 15 billion won ($14.2 million) in losses the company incurred from the strike.

Korail confirmed that its 8,797 union workers returned to work yesterday, following the word of union leader Kim Myung-hwan on Monday. The union leaders accused of instigating the strike remain harbored in relatively secure places, including Jogye Temple and the Democratic Party headquarters.

They are reportedly discussing when and how to turn themselves in, while police have vowed to enforce the outstanding warrants for their arrests.

But despite the workers’ return to work, Korail said it would take a few weeks for services to normalize.

“The Korail-run subway trains will operate normally on Jan. 6, and passenger and cargo train services on Jan. 14,” Choi said.

The record-long rail strike affected high-speed KTX services as well as other passenger and freight train operations. Korail cut passenger train services by about 24 percent in the past week.

Union members held a ceremony to mark the end of the strike, underlining what they consider the achievement of the walkout.

“We succeeded in bringing the discussion about privatization into the public domain and creating a communication channel to discuss the issue,” the labor union said in a statement. “But we will keep confronting the government and Korail, [which are] seeking to enforce punishment against the union members.”