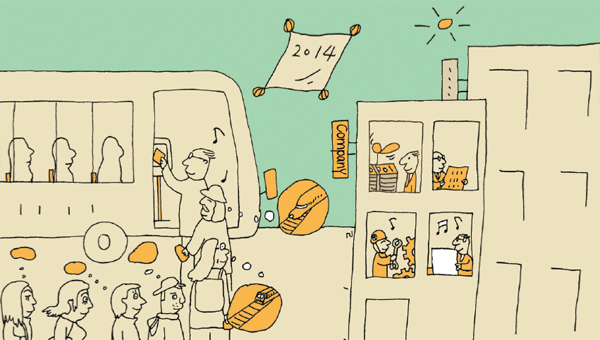 The New Year has brought changes to a slew of rules and regulations, from how to pay for public transportation to what minimum wage people should receive at work.

* From the first day of the New Year, all public transportation across the nation has started accepting a new type of T-money card. The old T-money card was used in Seoul only. Tolls on expressways had to be paid for with a different kind of card, and inter-city trains required cash or credit cards.

* Korea’s new and more logical address system will go into effect this year. When filling out official forms, everyone is required to use the new addresses.

* The Ministry of Land, Infrastructure and Transport came up with a handful of changes for transportation and residences that are taking effect from this year.

* Travelers will be able to use electronic devices such as smartphones and tablet PCs when flights take off or land from this month. People will still not be allowed to send text messages or make calls via mobile phones during flights, but other functions of mobile devices will be allowed.

* Motorbikes larger than 260 cc should be regularly inspected from Feb. 6. The idea is to keep emissions and noise from large motorbikes down. From 2015, bikes between 100 cc and 260 cc will be subject to checkups. Bikes between 50 cc and 100 cc will have to follow the rule from 2016.

* All taxis, from Feb. 7, will have to install airbags.

* From Feb. 2, taxi drivers are banned from smoking, regardless of whether they have passengers or not.

* The government will support management of apartment complexes from February. Government-run service centers will be established in each complex to help residents with complaints, arbitrate conflicts and manage facilities.

* The property-acquisition tax rate will be reduced after a yearlong debate on a tax that was blamed for plunging the national real estate market into a comatose state. For houses priced 600 million won ($568,639) or less, the rate will be 1 percent. Houses priced between 601 million and 900 million will face a 2 percent tax. For those over 900 million won, the tax will go up to 3 percent.

* In the business world, conglomerates will face stricter restrictions.

* Families controlling conglomerates will be banned from raking in personal profits by giving their subsidiaries special orders about internal transactions.

* Franchise operators will be protected by an enhanced regulation to prevent unfair treatment by their headquarters from Feb. 14. They will be protected from pressures to renovate stores, operate businesses at night and from various penalties.

* Subcontractors of large companies will also be protected from unfair costs forced on them by their clients from next month. Companies that bully their contractors will be subjected to penalties.

* Contract workers who have been working for one employer for more than three months will be preferred candidates for public housing. Daily workers will be eligible for benefits if they work continuously for 60 days at one workplace. Cargo drivers, golf caddies and insurance consultants have to continue working for one company for more than six months to get the benefit.

* For employers, the government will pay 300,000 won to 600,000 won monthly for a substitute worker to fill in for a female employee who goes on child care leave.

* The government will also offer up to 700 million won in loans with 2 percent annual interest rate to companies that establish female-friendly facilities like child care centers and breast-feeding rooms in company buildings.

* Senior citizens over 75 will receive benefits from the national health insurance for teeth implant procedures from July. The amount of benefits will vary according to each case. Until last year, teeth implants weren’t covered by insurance.

* The current culture pass system will be expanded from high school students to university students. Up to the age of 24, young people can enter national theaters, museums and art galleries at discounted fees or for free.

* All pet owners must register their pets from the first day of 2014. The registration system ran in trials in cities with more than 100,000 households until last year.

* To increase food safety and animal quarantines, pig farms will have to register their animals from December.

* From February, transactions at ATMs will work with cards fitted with microchips only. Consumers will have to exchange magnetic strip cards with chip-embedded ones through their card companies.

* Auto insurance companies will demand higher premiums from owners of high-end vehicles. The current 21 categories for auto insurance premiums will be increased to 26.