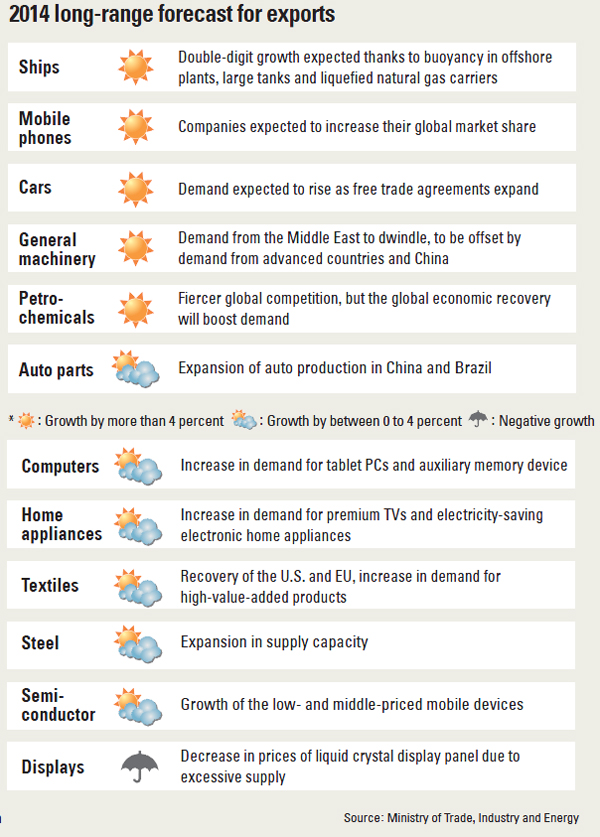 The volume of Korea’s trade will grow by 7.6 percent this year, but its trade surplus will decrease by 24.2 percent, according to the Ministry of Trade, Industry and Energy.

The ministry came out yesterday with its trade figures for 2013, which confirmed an early prediction that 2013 saw a record-high trade surplus for Korea.

That pushed Korea’s trade surplus to $44.2 billion, trumping the previous record of $41.2 billion recorded in 2010.

In a 2014 preview, the ministry said total trade volume, which amounted to $1,075.2 billion last year, will increase by 7.6 percent next year.

But imports will grow faster than exports, diminishing the trade surplus, it said.

The ministry attributed the future growth of imports to two factors: the stabilization of import prices of raw materials such as oil and recovering consumer sentiment.

The ministry said that the changing dynamics of positive and negative factors for the global economy could force it to readjust its prediction for trade this year, although it didn’t say precisely how much.

It said the recovery of the global economy could help Korea’s exports, citing the International Monetary Fund and the Organization for Economic Cooperation and Development, which both predicted the global economy to grow 3.6 percent this year.

But the ministry also pointed out adverse factors for Korea’s trade, such as the gradual expansion of the tapering of quantitative easing in the United States and the won strengthening against Japan’s yen.

Meanwhile, semiconductors regained their status as Korea’s No. 1 export product for the first time in three years last year thanks to increases in prices of memory chips used for mobile devices. Last year, $57.1 billion worth of semiconductors were exported, or 10.9 percent of all Korea’s exported items.

The last time semiconductors reclaimed their throne was in 2010 when their exports made up 10.9 percent of Korea’s total exports. In 2011, the proportion fell to 9.0 percent, making them the third-most exported item. Then the proportion rose to 9.2 percent in 2012, becoming the No. 2 export item.