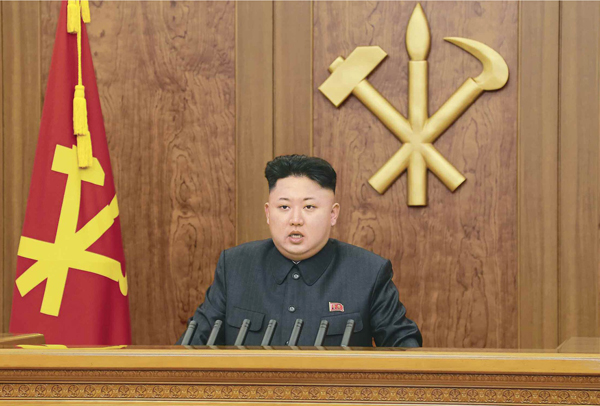 North Korean leader Kim Jong-un called for mending relations with South Korea in his New Year’s speech, possibly part of the young leader’s efforts to consolidate his grip on power in the aftermath of the execution of Jang Song-thaek, his powerful uncle.

In his 30-minute speech, which was broadcast yesterday by the regime’s official Korean Central Television, Kim showed a more conciliatory tone in improving inter-Korean relations compared with his 2013 speech.

“We should create an atmosphere for improving North-South relations,” he said. “It’s time [for us] to stop all this useless slandering and swearing that hinders reconciliation and unity [of two Koreas].”

“The South Korean government should stop the reckless fratricidal confrontation and the fuss of cracking down the pro-North Korean people,” he said. “… We should achieve a new progress in the movement for national unification this year.”

But despite Kim’s verbal gesture, the young leader still warned that a trivial military clash could trigger an all-out war on the Korean Peninsula.

“Those war-like people in the United States and the South are bringing all their nuclear weapons in full scale and crazily committing a North-bound nuclear war exercise,” he said. “That creates a dangerous situation in which a trivial and accidental military clash could prompt an all-out war.

“If a war happens again in this land, it would bring about a huge nuclear disaster, and the United States would not survive from it as well,” he threatened.

North Korea has frequently criticized the annual U.S.-Korea joint military drills, calling them “war practice against the North,” although the two allies have said that they are just part of South Korea’s self-defense. In March, North Korea declared the nullification of the Korean Armistice Agreement that ended the 1950-53 Korean War, just days before the Seoul-Washington joint military drills started.

Looking back on his achievements from 2013, Kim complimented North Korean scientists for developing state-of-the-art military technology for national defense and urged them to develop more modernized weapons that are “light-weight, unmanned, intelligent and precisely functioning.”

Last February, North Korea carried out its third-ever underground nuclear test. Analysts have speculated that the regime appears to have had success in developing a miniature, light nuclear bomb capable of being loaded on top of a long-range ballistic missile.

Economic revamp was still a key issue this year, he said. Notably, he placed an emphasis on agriculture in the impoverished state, and even the development of “green energy.” All of those economic policies would be “under the control of the ruling party,” he said, implying the growing role of the Workers’ Party.

He also mentioned that the ruling Workers’ Party had “eliminated the factional filth remaining in the party,” apparently referring to the brutal executions of Jang, his powerful uncle and former regent, and his confidants.

In a rare report by state media, North Korea said Jang was executed for treason and corruption. His two closest aides were also executed on the same charges, the report said.

“Compared to his previous statement in 2013, he seems to have toned down his critical rhetoric toward South Korea,” a South Korean government official said. “But we still have no faith in [North Korea’s] attitude later on.”