Reshuffle is expected at Blue House

Reshuffle is expected at Blue House 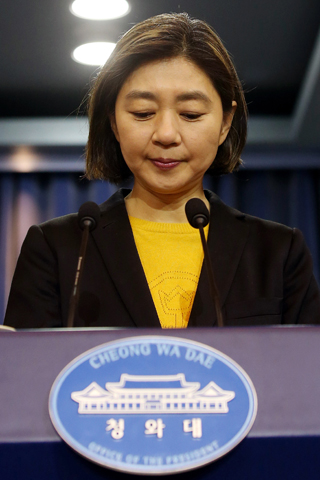 A reshuffle of the presidential office has become a possibility after the Blue House spokeswoman, Kim Haing, submitted her resignation on Tuesday and three secretary-level positions opened up.

The government’s lack of communication with the labor community was also heavily criticized following the end of a strike by the labor union of the Korea Railroad Corporation, which ended Monday after a 22-day walkout. That has only added to speculation that a wide reshuffle in the Blue House office may be eminent.

It has also been rumored that changes in Park’s presidential schedule are needed, raising the possibility of additional personal appointments at the Blue House.

“I understand there will be appointments for secretary-level positions in the Blue House soon,” said a staff member at the presidential office, who requested anonymity.

Kim tendered her resignation on Tuesday, saying that she needed time to “recharge” after serving as a spokeswoman in the first year of President Park Geun-hye term.

Kim’s resignation means that both the presidential press officers appointed by Park have left their posts less than a year after she took office on Feb. 25.

Yoon Chang-jung, the former Blue House spokesman, and Kim were the first two people tapped by Park for secretary-level positions in the Blue House. They were appointed as press officers on Feb. 24, a day before her inauguration.

But in less than four months after taking the job, Yoon - who also worked as a spokesman for the presidential transition team in early 2012 - was disgracefully sacked by the Blue House after he was implicated in a sexual assault case. Yoon was alleged to have harassed his intern, who was assigned by the Korean Embassy in Washington to assist, during Park’s presidential visit to the United States. The situation subsequently became the subject of public ridicule.

Kim’s resignation didn’t seem to come as much of a surprise considering that her role significantly shrank after Lee Jung-hyun, a longtime aide to the president, was named senior secretary for public affairs to replace Lee Nam-ki in June in the wake of the Yoon scandal. Since Lee assumed the role, he has run the majority of media-related occasions, including daily press conferences, often leaving Kim behind on the stage.

Kim served as a vice chairwoman of the social media news firm Wikitree before being named as the Blue House spokeswoman. She also worked as a spokeswoman for Chung Mong-joon during his unsuccessful bid for president in the 2002 election.

The Blue House is expected to announce a new presidential press officer after a vetting process. Park plans to hold a press conference later this month, and it is expected that the position will soon be filled by a man.

A day after Kim’s resignation, 10 first-level public servants at the Prime Minister’s Office also submitted their resignations, raising the prospect of an across-the-board reshuffle among government offices.