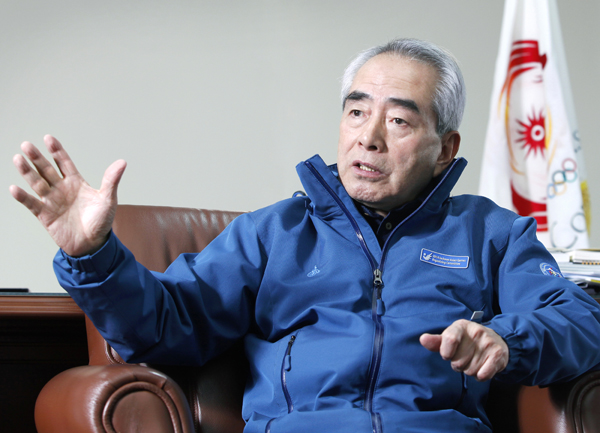 Kim Young-soo, president of the 2014 Incheon Asian Games Organizing Committee, talks about preparations for the event. By Park Sang-moon

Korea is set to have a big year in athletics in 2014. In February, figure skating queen Kim Yu-na will perform her swan song at the Sochi Winter Olympics. In June, the Taegeuk Warriors, led by coach Hong Myung-bo, will fly to Brazil for the FIFA World Cup. After those two international, overseas events, Korea will host the Incheon Asian Games from Sept. 19 to Oct. 4. The sporting event is being promoted as a festival in which people from around the world can enjoy the diverse cultures of Asia. Last month, the Korea JoongAng Daily sat down with Kim Young-soo, 71, the president of the Incheon Asian Games Organizing Committee, to talk about the event.

Kim said his goal is to attract more than 2 million visitors, including 200,000 foreigners, with a series of cultural events that offer an opportunity to meet K-pop stars - like the boy group JYJ - and a chance to taste diverse foods from Asian and Mediterranean countries while also enjoying big sporting events such as the rematch between swimmers Park Tae-hwan of Korea and Sun Yang of China, who last faced each other in the 2012 London Olympics. Kim added that he hopes the event will be remembered for giving hope to small nations that they can become competitive in the future.

Q. About nine months are left before the Asian Games begin. How are things shaping up?

A. It’s been two years since I started working as the chief of the organizing committee, and I think most of the things are being prepared well. The one thing that we have been focusing on recently is informing people outside the country about the event so they can visit Incheon and enjoy it.

There are worries that the event could cause financial losses. Some said it isn’t right to hold this kind of expensive international event when Incheon is expected to have 3.3 trillion won ($3.1 billion) of debt by the end of the year.

[Former Incheon Mayor Ahn Sang-soo pledged to host an Asian Games in the 2006 local elections. By winning the bid in 2007, Korea will host the event for the third time, after Seoul in 1986 and Busan in 2002. The central government recommended that Incheon use Munhak Stadium, which was built for the 2002 FIFA Korea-Japan World Cup, as the main stadium, but the city government decided to build a new facility using private investments - a plan that failed. The central government eventually made the city government pay 490 billion won for the new stadium, and the city government will spend about 3 trillion won this year building 10 more facilities, including an indoor swimming pool and a volleyball stadium.]

The city government decided to host the event because it thought it could do so without receiving money from the central government if it sold 10 million pyeong (3,305.7 hectares) of reclaimed land in Songdo, Incheon. Some of the plan worked out but some of it didn’t, and because there is land left over that could attract investment later, I think the city government will overcome the problems. And one thing I would like to ask people who view this event skeptically is that they need to look even further into the future. Because a lot of money has been invested into many sports and cultural facilities, the overall environment of the city has been improved as well. Such changes can help Incheon become a better tourist attraction, and finishing this event successfully will help to boost the local economy.

You said the Asian Games will be an athletic event and an entertainment festival. Could you give us some details?

It is important to let foreigners know that Incheon is a very good tour site, maybe better than Gangnam in Seoul. Residents need to realize that their city is a competitive place. The investments we have made will help them to love and be more proud of their city. And because there are now several medical institutions and clinics there, visitors can experience a series of medical tour packages. Also, we will have a food festival and chefs from participating nations will introduce their local cuisines, including Korean, Chinese and Vietnamese. In September, there will be some exciting K-pop concerts.

I agree. Because the project to build a subway line to Incheon Asiad Main Stadium in Seo District has been halted due to financial problems, we are planning to operate shuttle buses between the main stadium and areas where the athletes and media will stay. Those buses will run in areas that are connected to other public transportation. I heard from the city government that the city needs about 200,000 rooms, but under the current circumstances only about 100,000 are available in areas close to Incheon, so 100,000 people will have to stay in other areas, such as Seoul and Gyeonggi. The city government also said it will provide more options like temple, church and home stays, and it will temporarily allow small motels to be classified as hotels after their interiors are improved.

What can we expect?

I strongly suggest that people planning to visit the 2014 Asian Games watch the opening and closing ceremonies, because we haven’t revealed any details about them. I can say that people can anticipate some eye-popping celebrities from culture, art, sports and K-pop. In sports, I think baseball will be fun to watch because there hasn’t been an international amateur competition since the 2012 London Olympics. Also, there is a rematch between swimmers Park Tae-hwan, the winner of the men’s 400-meter freestyle at the 2008 Beijing Olympics and the runner-up of the London event, and Sun Yang, who took second place at the 2008 Olympics and won the gold medal in London.

It looks like North Korea is undergoing serious political chaos since Kim Jong-un became its leader. Do you think the North will participate in the Asian Games?

I think the chance is high. North Korea has participated in international events, regardless of its political climate. For example, North Korea’s women’s football team took place in the 2013 East Asian Cup, which was held in Seoul in July.

How do you want people to remember these Asian Games?

First of all, I hope it will create a surplus, unlike previous events. I heard that the 2010 Guangzhou event spent about 115 billion won per day, and I think that was too much. The Incheon event will be operated with a limited budget with systematic plans and I think it is important for us to create a surplus because it would give other smaller Asian countries hope to become a host country in the future.

As part of accomplishing this goal, we have been carrying out a project, “Vision 2014,” which helps small nations to foster athletic coaches and players and lends athletic equipment. We will also train referees and judges to make fair decisions. I also want to ask many celebrities to participate as part of their social contributions.

I think those newly built sports facilities, memorial parks and exhibition halls will be great legacies as they will be utilized in many ways. I expect Incheon to become an international city that people living outside of the country would recognize as much as Seoul.